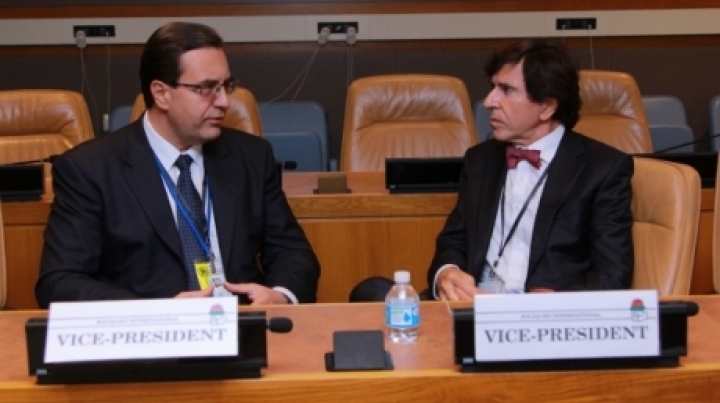 Marian Lupu, as the vice president of the Socialist International, participated in New York at the annual meeting of heads of states and governments belonging to the social democratic family. PDM leader spoke about Moldova's European aspirations and called on international partners for more support for Moldova.

Socialist International Presidium meeting was held at the UN headquarters and concentrated on current issues on the interantional agenda.

In New York, Marian Lupu had the opportunity to talk with many Social-Democrats colleagues and friends in Europe.

"I believe that PDM and Moldova should participate in major policy debates that concern today's world: poverty and social inequality, the problem of peace and security in the world, the issue of development in the global economy. Namely starting here, we manage to draw better attention to the problems of our country. I will use every opportunity and every means to promote the worldwide interests of the citizens of my country. Moldova has powerful friends, and if we strengthen ties with them, our country will also be stronger" , said the PDM leader.

In New York, Marian Lupu has received confirmation that the Social Democrats in Europe will support Moldova's integration into the European Union, meaning support for modernization of the institutions and European funds for development of the country.

Socialist International leaders have referred to the presidential election on October 30, reiterating support for Marian Lupu as president of Moldova.

"Marian Lupu is the best politician to assume the responsibility of being the President of Moldova. I appreciate that it has the ability to listen to people and do not take impulsive decisions. It's a person in whom Moldovans can trust" , said the leader of Organization Women of IS, Ouafi Hajji.

"He is a colleague in our political family. I am very glad to see him again full of enthusiasm. I wish him success in the elections and I hope that next time we meet I will see my friend as President of the Republic of Moldova" , said in turn secretary general of the Socialist International, Luis Ayala.

"He is a person who fights for democratic and transparent society. I much respect his qualities and aspirations. Obviously, Moldovan citizens who will have to decide, but, for me, he has my vote" , said President of the Socialist International George Papandreou.