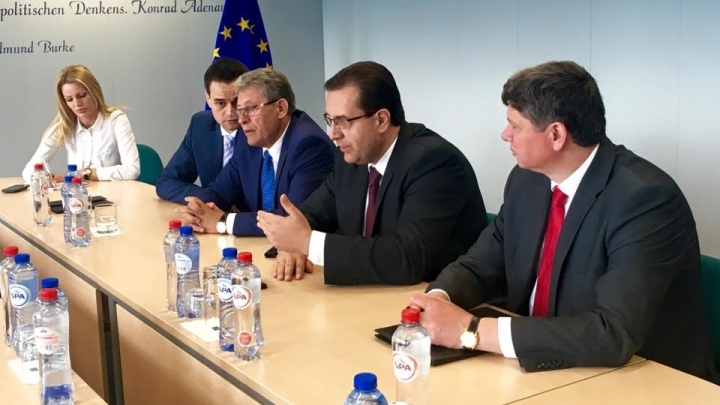 The first six months of governing have contributed to the recovery of the trust and partnership between Moldova and European Union. This is the opinion of officials from Brussels, who had a meeting with PDM president, Marian Lupu, and PL leader, Mihai Ghimpu. The European officials appreciated the fact that were done stabilization actions of our country from political, economic, and social point of view.

The Moldovan and European officials have discussed the draft regarding the implementation of Agreement of Association of Moldova to European Union and gave assurance that once signed the Agreement with IMF, the financing of Moldova will be continued. Another discussed subject was the change of the Broadcasting Law.

The PDM president has mentioned that in this regard should be applied the rules from EU. And the PL leader said that after the discussions with European partners the document will be improved. Marian Lupu and Mihai Ghimpu gave these declarations after returning to Moldova and when they went to the French Embassy in Chisinau, where they laid flowers in memory of attack victims in France.

“We have to follow up norms which are actively used in European Union. The direction is a conceptual one and it is supported. Accordingly, we have to solve the details” declared PDM president, Marian Lupu.

“I think that Mr. Lupu talked about our visit to Brussels. We had good meetings. Two problems were approached, one of them being the Broadcasting Law, a little bit negatively, the rest was positive” said PL resident, Mihai Ghimpu.

Marian Lupu and Mihai Ghimpu net in Brussels the director for Europe and Central Asia from the External Action European Service, Thomas Mayr-Harting, the chief of Cabinet of the Commissary for neighboring policies and negotiations for expansion, Johannes Hahn, and with Carl Hartzell, member of the Cabinet of the European Council President.