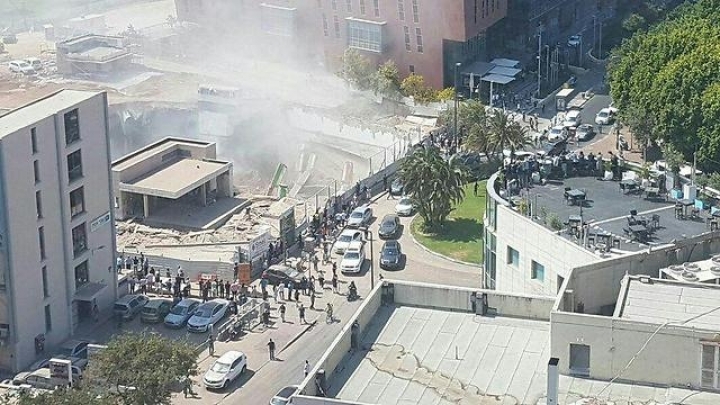 At least 15 people are trapped in a collapsed, partially-constructed building Monday in northern Tel Aviv, reports Times of Israel.

Six people walked out of the rubble in the minutes following the collapse. Those who remain are construction workers, according to authorities.

Initial reports suggest the collapse may have resulted from the fall of a construction crane belonging to the Danya Cebus company.

The incident took place on the corner of Habarzel and Hanehoshet streets in Tel Aviv’s Ramat Hahayal neighborhood.

Roads have been closed to traffic in the area to allow emergency services to reach the site.

Magen David Adom CEO Eli Bin told Channel 2 that rescue services are attempting to enter the apartments, but that none of the people trapped in the building have yet been extracted.

Some of the stories where people are trapped are underground, MDA told Army Radio, making access more difficult.

“Several stories of the building collapsed. There’s still a danger of further collapse,” Eran Yehuda, spokesman for the Yarkon District of the Tel Aviv Police, told Channel 2. “I’m asking the public, the curious to leave the place. Dozens of vehicles of MDA and police trying to gain access.”

Medics and doctors from the nearby Asuta hospital rushed to the site, which lies across the street from the hospital.