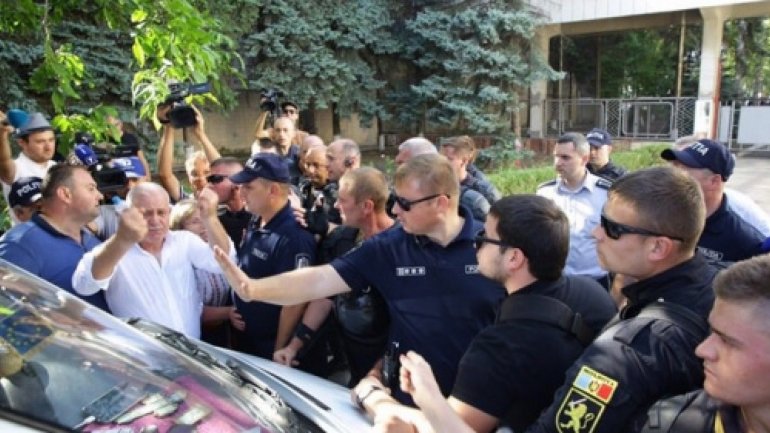 The Police Deputy Chief, Gheorghe Cavcaliuc, from General Police Inspectorate declared that the driver that tried to run over people during the protest near Moldova 1, was detained for 72 hours. He was earlier announced wanted after feeling the sight.

According to him the 50-year-old suspect, resident of the Capital, has admitted to his actions and now risks up to 8 years of jail time.

"The man tried to run over police officers with a minibus. Then, he used the crowd to flee before we could stop him" Gheorghe Cavcaliuc declared.

Law enforcement have also managed to even catch the owner of the vehicle, who came back after it and tried to drive on the opposite lane, near the officers.

According to Democracy.md, 43-year-old Ion Matasevici, was arrested last year for violent protestation on Bulgară street, when multiple Andrei Năstase supporters started taking bricks and throwing them at police officers.

At the moment he is investigated for violence of 24th April 2016 where after the harassment from Năstase supporters, 17 officers were injured by bricks thrown at them.

Yesterday leaders of Dignity and Truth Platform Party and Party of Action and Solidarity have organized a protest in the Great National Assembly Square, afterwards people tried to force their way on the territory of Moldova 1. The aggressive politicians demanded the news channel to call them more often for interview and to broadcast live the protest.

Unhappy with this people decided to attack the police officers.

Director of the Television Channel, Ecaterina Stratan, declared that such demands, of providing the political leaders more broadcast time, is a direct breach of the editorial policy.

"This week, Moldova 1 has broadcast nearly daily the events organized by Dignity and Truth Platform Party and Party of Action and Solidarity, I have tried to enter in a peaceful dialogue, as that is how the protest announced itself to be, with the organizers, but unfortunately it never took place due to the violence" Ecaterina Strata declared.

During the protest, the national television channel has broadcast a special edition regarding the event.