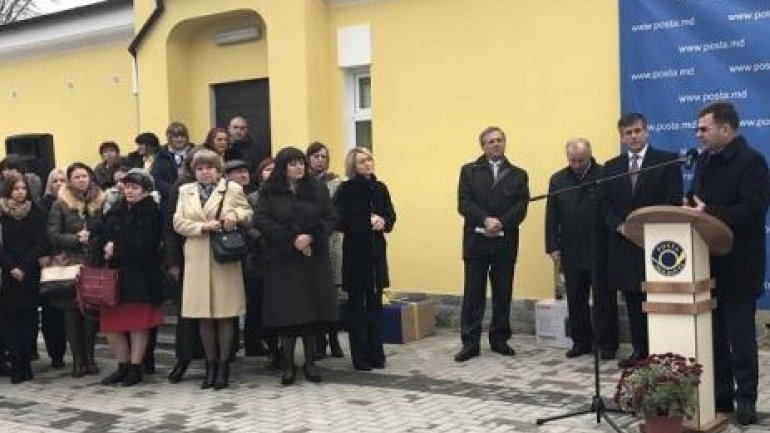 The main post office in Balti was reopened after renovation. Employees now have better conditions and operating technologies. This allows them to serve customers more quickly. The restoration and modernization works lasted four months and cost more than five million lei.

Located right in the center of the city, the post office building is an architectural monument built in the early twentieth century. Because of groundwater the  foundation of the headquarters was damaged. Now, after being renovated, the building has most modern drainage system.

"The building is unique in Balti, now it has a contemporary drainage system, with special pumps, fountains, which maintain the water at a certain level and do not let it up in the basement. There were strengthened the walls foundation," said the director of Balti Post Centre, Vasile Gutu.

Post office has been fitted with an electronic system of customers monitoring. People are happy that they will not waste time in queues.

According to the management of Enterprise "Posta Moldovei", in order to cope with the large number of packages, soon will be built a logistics center.

"The Ministry together with Posta Moldovei are developing a project on the lot. It stipulates that outside Chisinau, inside the airport, to be built a new logistics center and postal sorting of all post mails" said the general director of Posta Moldovei, Serghei Nastas.

According to Minister of Information Technology and Communications, Vasile Botnari, new technologies used by the enterprise has improved the process of service supply:

"It is important to offer quality services in modern conditions. Now Posta Moldovei is implementing modern technology which means less time to serve a citizen."

Also today four employees of the enterprise "Posta Moldovei" received the distinction "Master of communications" provided by the ministry.

By the end of the year will be inaugurated four post offices and 11 postal agencies. Today in our country are over 1,260 post offices.