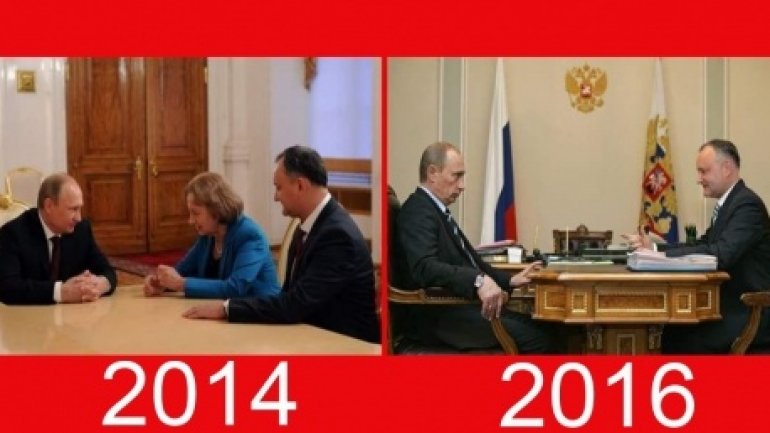 The independent candidate for president, Maia Laguta asked Central Election Commission to eliminate the Socialist Igor Dodon, of presidential race for using the image of Russian President Vladimir Putin, in the current campaign.

Previously, Laguta asked the same thing on Maia Sandu. Central Election Commission has warned Action and Solidarity Party candidate for such a deviation.

According to a complaint filed by Maia Laguta to the CEC, the candidate accused the Socialists candidate for using the photo of Russian President Vladimir Putin. Thus, Laguta asked the Central Electoral Commission to ask the Court of Appeal to eliminate Dodon from the race.

"As of October 26, photos with the image from the meeting contestant Igor Dodon with Russian President Vladimir Putin started to appear on social networks. The Election Code was seriously violated. We filed an appeal to the Central Election Commission on candidate Maia Sandu on October 21st" , said indipendent candidate Maia Laguta.

As a result, former Minister of Education received a warning from the CEC.

PUBLIKA.MD recalles that during a visit to Brussels, Maia Sandu appeared in the media alongside Angela Merkel, Donald Tusk and Jean-Claude Juncker.

CEC's decision to penalize the candidates when they appear next political notoriety was eliminated under the new provisions of the Electoral Code. The legislative changes were made after the previous campaigns, many candidates or parties have had electoral picture with famous officias.

The Democratic Party, whose leader is Marian Lupu, appeared in the campaign for parliamentary elections in 2014, along with representatives of European Socialists.

Also, former leader of the Liberal Democratic Party, Vlad Filat, has increased its social image when he appeared alongside German Chancellor Angela Merkel. But the best example comes from the Socialists. The two PSRM leaders, Igor Dodon and Zinaida Greceanii met in the middle of the 2014 campaign, with Russian President Vladimir Putin.

Immediately after that, a photo of that meeting appeared on the electoral boards of the Socialists. Russian leader Vladimir Putin is the most trusted politician among Moldovans.
AFLĂ imediat Știrile Publika.MD. Intră pe Telegram