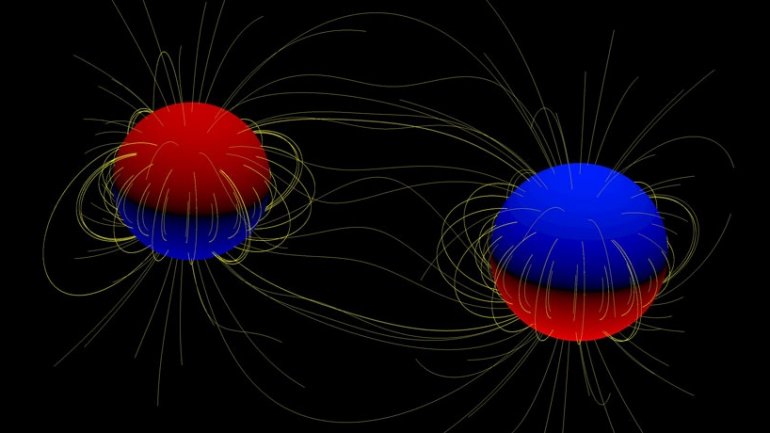 To create a heavy black hole, it might help to start with a massive magnetic star.

Strong magnetic fields could help stem the flow of gas from a heavyweight star, leaving behind enough material to form hefty black holes, a new study suggests. A pair of such magnetic stars could be responsible for giving birth to the black hole duo that created recently detected gravitational waves, researchers report online December 1 in Monthly Notices of the Royal Astronomical Society.

The shake-up in spacetime that was picked up the Advanced Laser Interferometric Gravitational-Wave Observatory, or LIGO, in 2015 came from a collision between two black holes weighing about 29 and 36 times the mass of the sun.

Such plump black holes were surprising. The creation of a big black hole requires the explosive death of a gargantuan star. But weighty stars are so bright that the light blows gas into space.

“These massive stars can lose up to half their mass to their dense stellar winds,” says study coauthor Véronique Petit, an astrophysicist at Florida Institute of Technology in Melbourne. That leaves only enough mass to make a more modest black hole.

Having a paucity of elements heavier than helium is one way a massive star might retain gas. Atoms such as carbon, oxygen and iron present large targets to the radiation streaming from a star.

Photons nudge these atoms along, generating strong stellar winds. A lack of heavy elements could keep these winds in check.