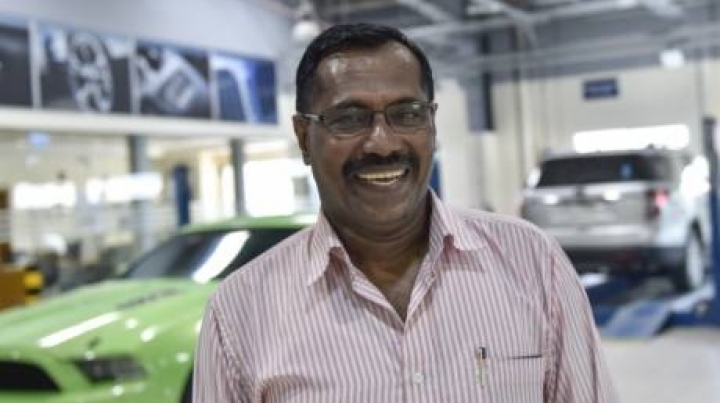 He escaped along with all 300 on board minutes before the plane exploded in to a huge fireball.

Now it has emerged that the 62-year-old grandfather has won the equivalent of a million dollars after buying a winning lottery ticket.

Khadar, who works in a Dubai car dealership, purchased the ticket before going on a family holiday to Thiruvananthapuram in the south Indian state of Kerala.

On his return, the Emirates plane crash landed at Dubai airport. Incredibly, all of those on board, including 24 Britons and six Americans, were led to safety minutes before the Boeing 777 was completely engulfed in flames.

Khadar claimed his winnings on Tuesday with lucky ticket number 0845, which was drawn in the Dubai Duty Free Millennium Millionaire at Concourse A in the terminal.

He told Gulf News: 'I have been working in Dubai for 37 years, and I have always felt like this is my country. I live a simple life, and now that it’s my time to retire, I feel like God gave me a second life when I survived the plane crash, and blessed me with this money to follow all this up by doing good things.'

He described his escape from the plane crash as a 'miracle' and valued it as a 'more precious gift from God'.

'I knew God saved me for some specific purpose. Probably this is it,' he added.

It was the 17th ticket he had purchased over the years and came four months before his retirement - having worked in Dubai since 1978.

He now plans to retire to his homeland - and help those less fortunate than himself with the help of his winnings.