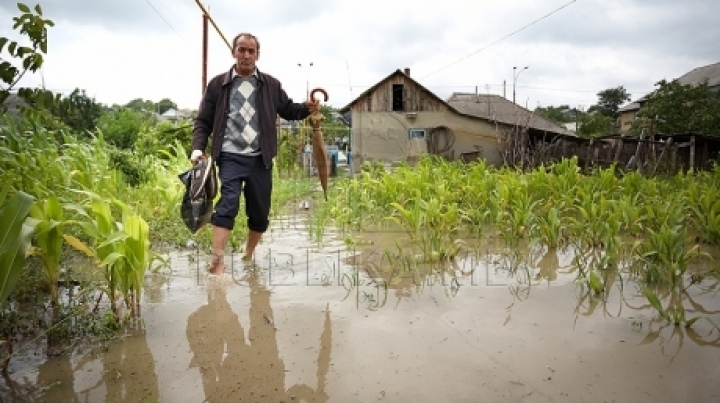 Houses, cellars, wells and gardens were flooded. Over 120 households from Loganesti village of Hancesti district were highly affected as a result of yesterday’s rainstorms. In order to assess damage made by the rains in the whole country, the prime-minister Pavel Filip has called out two sessions at Operational Centre of Emergency Situations Management, yesterday at midnight and today in the morning.

The water has taken the villagers from Loganesti by surprise. People barely managed to save their animals.

The damages are assessed by a special committee. Until now has been calculated a loss of 300 000 lei.

Substantial damage was avoided in Iargara village of Leova district, where the dam of a lake has surrendered. After all measures of protection were taken, all the water was drained in a reservoir and did not affect any household.

According to authorities, the rainstorms have made damages in villages from Leova, Hancesti, Basarabeasca, Ialoveni, Cahul districts and in Chisinau. Over 400 firemen and rescuers and 70 fire machines have worked all the night in order to clear out all consequences. By now there is no information regarding the potential loss of farmers.

This morning, at the first hour, Pavel Filip has asked responsible people to present complete reports on rain storms consequences.

“I ask from you correct, exact reports. Those who will give erroneous reports will have to give up their positions” has specified Filip.

Now all the roads are practicable.