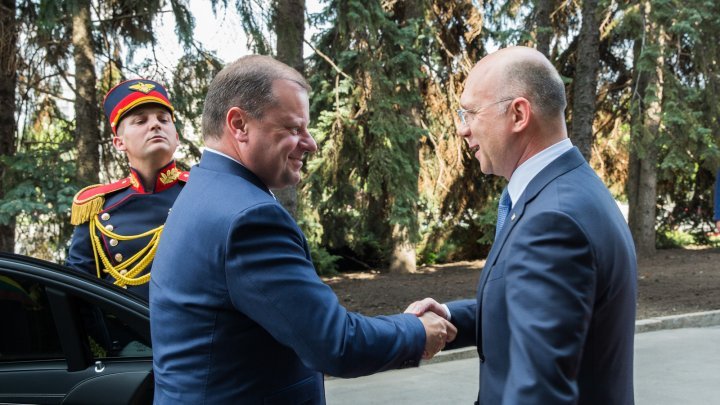 Lithuania supports the European Path of Moldova and pledges to provide our country support for resolving the Transnistrian issue, it has been said by Lithuanian PM Saulius Skvernelis in meeting with Moldovan counterpart Pavel Filip on his visit to Chisinau.

At the meeting, the prime ministers exchanged views on the European path and the reforms initiated. Saulius Skvernelis shared his country's experience.

"We have seen in my discussions that the Cabinet of Ministers led by Mr Skvernelis chose a reform agenda, which is much like our agenda. There were challenges to go through reforms in education, reforms in health care, reform of the pension system, "said Pavel Filip, prime minister.

"These reforms are not made for the sake of the European Union or someone else, but for Moldova, they will help to improve the citizens' quality of life and will allow them to be guided by the principles of the European community," said Saulius Skvernelis, Prime Minister of Lithuania.

Also, the Lithuanian Prime Minister has stated that he supports the territorial integrity of our country and the reforms initiated by the Chisinau government in this respect.

"We support those actions that have been mentioned by the Prime Minister regarding the recognition of diplomas in Transnistria," said Saulius Skvernelis, Prime Minister of Lithuania.

Finally, the premiers made a promise.

"The Republic of Moldova was the first to recognize the independence of the Republic of Lithuania. Please be first when we become members of the European Union," said Pavel Filp, prime minister.

The Lithuanian Prime Minister also met with Legislative President Andrian Candu. Saulius Skvernelis assured that he will inform the European Parliament and the European Commission of the reforms successfully implemented by our country. In his turn, Andrian Candu appreciated his support.