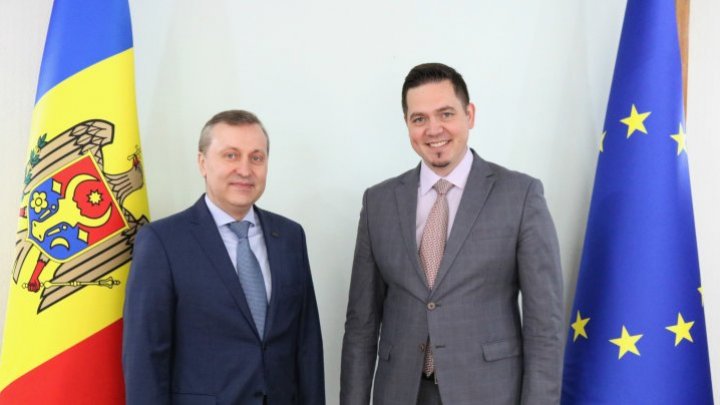 foto: mfa.md
Lithuania is an active supporter of the European path of the Republic of Moldova and is committed to continuing its support for the development projects in our country. The statement was made by the Lithuanian Ambassador to Moldova, Rimantas Latakas, who ends his mandate in Chisinau during a meeting with Tudor Ulianovschi, the Minister of Foreign Affairs and European Integration.

During the meeting, Tudor Ulianovschi and Rimantas Latakas had an exchange of views on the current state of Moldovan-Lithuanian relations, mentioning their intensification over the last period of time on all dimensions. According to the interlocutors, the recent inauguration of the Honorary Consulate of the Republic of Moldova in the Klaipeda region is a new step towards expanding bilateral relations, establishing new partnerships between two countries.

Head of Moldovan diplomacy expressed Chisinau authorities' appreciation for development assistance provided to the Republic of Moldova by the Lithuanian government in important areas such as domestic affairs, exceptional situations and road traffic, food safety, etc.

Minister Tudor Ulianovschi appreciated the contribution of Ambassador Rimantas Latakas to the development of Moldovan-Lithuanian relations, in particular by organizing several high-level and sectoral visits, which had a major impact on intensifying bilateral political dialogue and cooperation in areas of interest reciprocal.

For his part, Ambassador Latakas mentioned that the Republic of Moldova remains one of the priority beneficiaries of development support from Lithuania, including in making the necessary reforms for our country.
loading...
AFLĂ imediat Știrile Publika.MD. Intră pe Telegram