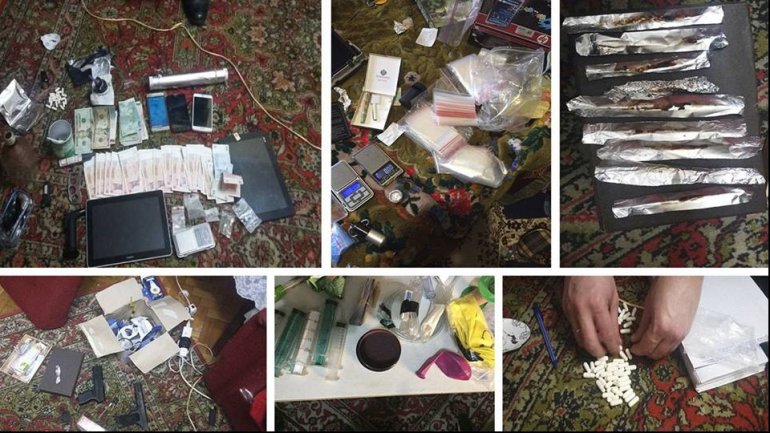 Officers of Anti-drug Directorate of the National Inspectorate of Investigation in cooperation with the General Directorate of Criminal Investigation of the Police General Inspectorate and the prosecutor from the Prosecutor's Office for Combating Organized Crime and Special Causes documented the criminal activity and dismantled a criminal group specializing in illicit drug trafficking in the country and their trade in particularly large quantities inside the premises of leisure and through internet.

Thus, seven people, including an employee of the National Inspectorate of Investigation having the role of merchant and a person who worked as a dancer in a club in Chisinau, aged between 23 and 33, residing temporarily in Chisinau, were detained by police.

According to research, since December of 2016, the suspects would constitute a criminal group to procure and trade drugs of risk and high risk, and of substances with psychoactive effects, in order to obtain illicit revenues. Some of them were involved in selling drugs in nightclubs, others selling drugs via internet using electronic payments and social media in the recruitment of distributors.

Also, they were using different applications for communication, the physical contact between producer and consumer being excluded, and the money was deposited in an electronic account, afterwards being transferred several times to lose track of them.

On 30 January 2017, was detained an employee of the National Inspectorate of Investigation who purchased drugs from dealers and sold them to consumers for higher amounts of money.

Afterwards two dealers were detained, and at their homes were discovered particularly large quantities of various types of drugs, guns, cartridges, falsified identity cards of the police employee, handcuffs, a laboratory producing drugs with precursors intended for the production, small scales, zip-lock sachets, and plastic cartridges for packaging drugs, money from realization of drugs equivalent to more than 50 000 lei, mobile phones and other objects that serve as evidence in the criminal case.

In total they were seized drugs worth over 200,000 lei. All persons are under arrest. In this case it was initiated a criminal case under Art. 217/1 paragraph 4 of the Criminal Code of Moldova. According to the legislation, persons found guilty can be punished by imprisonment from 7 to 15 years.

Currently actions are taken to identify other persons involved in the scheme of making drugs.

The actions were conducted with the support of the police from the Special Purpose Brigade "Fulger".