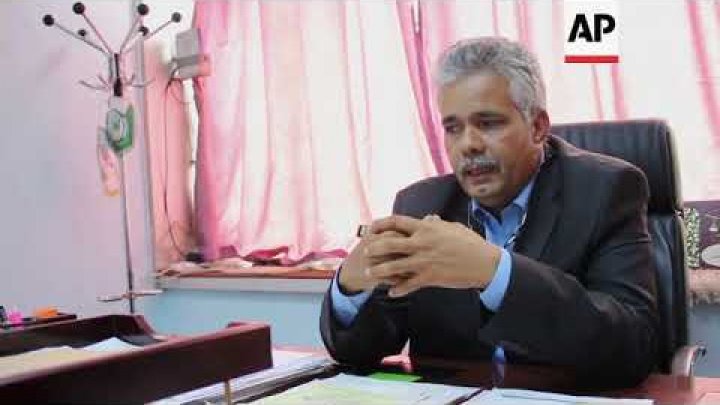 The machines continue to work in the Bani Walid Wool Textile Company.

The noise rises from the machines and the wool is spun, separated and wound into precise reels which are stacked high and will be woven into fine oriental carpets.

Because of the Libyan civil war and the recent security instability in the country it remained closed for four years.

This large textile complex was established in 1983 in the city of Bani Walid, about 200 kilometres (124 miles) south of the capital Tripoli.

The company's manager, Al-Najeh Al-Houderi, says the factory is among the few factories still operating in Libya.

"The Bani Walid Wool Industries Complex is one of the largest industrial fortresses in Libya in the spinning and weaving sector. It is one of the few factories which are still operating today," he says.

The factory currently offers employment to many but suffered extensive damage during the unrest in Libya in 2011 and 2012.

Al-Houderi says some sections are completely destroyed and estimates that overall damage affects more than 50 per cent of the building.

The remaining machinery has been restored and is now back into action.

But Al-Houderi hopes the money from Libyan Fund for Economic and Social Development will help to re-establish the rest of the machines and factory floors.

From 2006, the factory became a joint stock company until the beginning of 2017, when the Libyan Presidential Council took over and included it as a company which the fund can help.

The factory now produces two types of carpets, fine luxury ones and those for everyday use.

Previously some of the carpets from here were shown in a number of local and international exhibitions.

Many factories in Libya suffered destruction due to their locations in areas that had been subjected to clashes over the past years.

In addition, regional insecurity meant many of the foreign workers had to flee.

This worsened the production and symbolised the deterioration of Libyan economy in general.

Prior to 2011, the factory produced 1500 metres per day. But this has gradually declined.

This was due to the high prices of raw materials and the extent of damage to some of the machines.

There are around 50 machines currently operating and one which is used in the luxury carpet section.

The repairs are difficult, especially as the factory cannot afford to import spare parts for the many machines which are made in Germany.