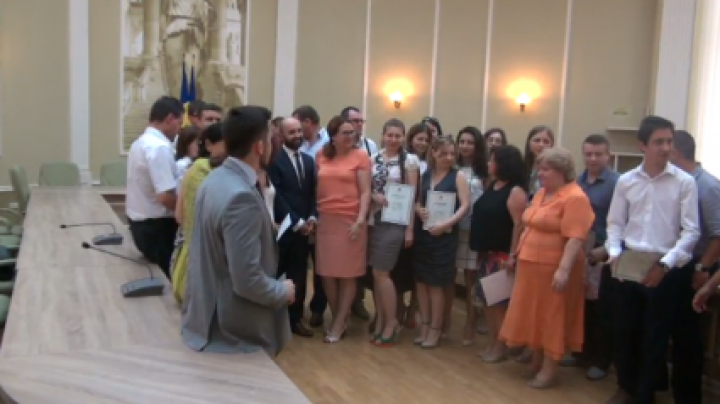 After two weeks of training, 65 mediators took their licenses today. Based on qualifications, they will be able to help different categories of people to solve peacefully their problems with others, without leading to a lawsuit.

Zinaida Onica is a 32-year-old woman from Chisinău. Even though she graduated in psychology, the conflict mediation courses were the ones that helped her prevent a divorce.

"We encounter many domestic cases, where conflict apears because there is a child with special educational needs. Stressed parents don’t know how and what to do.  We try to settle some conflicts, talk to the mother and father," said Zinaida Onica.

"The mediation domain it’s a perspective one. A mediator must firstly know how to listen and must be the one to facilitate the solution which comes from both sides," said the mediator, Ion Bambuleac.

Among the graduates of the course is also the Head of the Department of General Education, Youth and Sport, Tatiana Tverdohleb. She has an experience of almost 20 years in the field.

"In a family, a teenager's mother, who could no longer recognize her daughter, understood that it would be best to accept the girl's ideas too," said head of Department of General Education, Youth and Sport of the Chişinău municipal council, Tatiana Tverdohleb.

Representatives of the Ministry of Justice hope that they will reduce the number of disputation that end up in court.

"Two parts, one solution is the European practice of litigation that we take. For example, a period of six months is granted for a divorce from which, to my knowledge, 90 percent fails, " said the head of the Department Professions and legal Services of the Ministry of Justice, Lilian Deliu.

The mediators are not paid by the state. Their services are covered financially by the mediated parties.