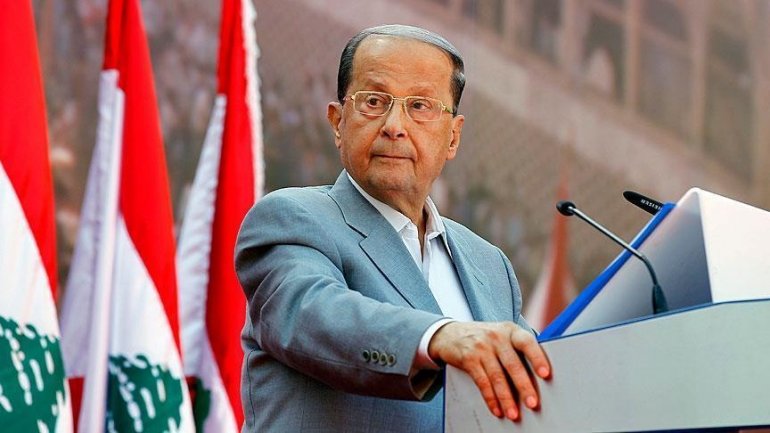 Celebrations erupted in Lebanon on Monday minutes after the announcement that Michel Aoun had been chosen by parliament as the country's 13th president, ending a presidential vacuum that had lasted more than two and a half years, reports Anadolu Agency.

Celebrations were seen in Beirut’s Christian-majority Keserwan and al-Ashrafiya districts; in Haret Hreik, a Hezbollah stronghold in the city’s southern suburbs; and in the town of Zahle in the eastern Bekaa Valley region.

In the streets of Beirut, people waved banners of Lebanon’s Free Patriotic Movement (FPM) - which is headed by Aoun, a Maronite Christian - and Lebanese national flags.

Chanting slogans and national songs, hundreds of FPM supporters gathered in the city’s public squares to celebrate the election of Aoun, who was speedily sworn in as the country’s 13th president.

Aoun was elected president of the republic on Monday after clinching the votes of 83 out of the 127 MPs who attended the parliamentary vote session.

A total of 36 MPs voted against the move by casting blank ballots, while another eight spoiled their votes.

Aoun’s victory came in the second round of polling - which required a 50-percent+1 (65-deputy) majority - after failing to win a first-round vote that required the support of two-thirds of the assembly (at least 86 deputies).

Lebanon’s presidency had remained vacant since former President Michel Suleiman left office in May of 2014.

Since then, 45 attempts by parliament to elect a new head of state ended in failure, with MPs affiliated with the pro-Syria/Iran March 8 Alliance boycotting the vote, thus preventing the required two-thirds quorum.

Lebanon’s political forces remain sharply divided between supporters of the March 14 alliance - which backs the armed opposition in next-door Syria - and the March 8 alliance, which includes Hezbollah and supports Syria’s Assad regime.

In 1943, Lebanon’s Muslims and Christians agreed to distribute the country’s three most important political posts between them.

Ever since, according to an unwritten National Charter that remains in effect until today, the president (who serves for non-renewable six-year terms) should be a Maronite Christian; the prime minister a Sunni Muslim; and the speaker of parliament a Shia Muslim.