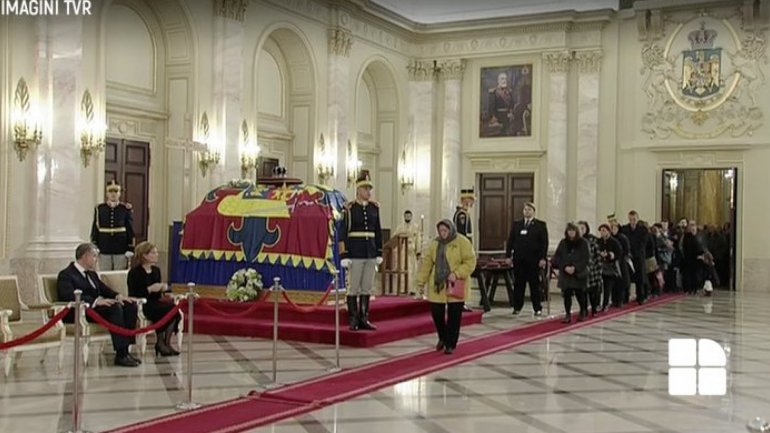 People can access the Royal Palace from Bucharest, where the coffin of his Majesty is held, till 22:00 local time. At this moment, in from of the Royal Palace has formed a 250 meters line of people who wish to pay tribute to their late King.

The Royal House mentions that people who wish to come commemorate the late King have to respect the following rules: Be dressed appropriately, in dark colors; Do not bring in any bags, or luggage which takes place; Do not come with children under 7 years old, or strollers; Do not use cameras, cell phones, or any other electronics. According to Romanian press, at the funeral ceremony was used a copy of the Crown of Steel, all Kings of Romania wore, starting Carol I, as the real Crown is kept in the National History Museum from Bucharest. The crown was made in 1881 for King Carol I from the steel of an ottoman tower captured by Romanians from Plevna, during the war from 1877. In 1922, the Royal Crown of Romania was bestowed upon King Ferdinand, while on 6th September 1940, the symbol of Independence was worn for the first time by King Michael I.

On Saturday, the casket of late King of Romania will be taken by the Royal Train from Bucharest to Curtea de Argeş, while in that evening will take place a funeral service at the Cathedral. At His Majesty's funeral are expected 16 Royal Families from countries such as: Great Britain, Spain, Belgium, Sweden and Jordan, as well as six Imperial Families, among whom those from Russia, Austria and Germany.

The event will be broadcast live at Publika TV.

A team of journalists will be persent at the event. King Michael I has passed away last week in his residence from Switzerland, at 96. The late King has stopped appearing in public last year, after his health worsened.