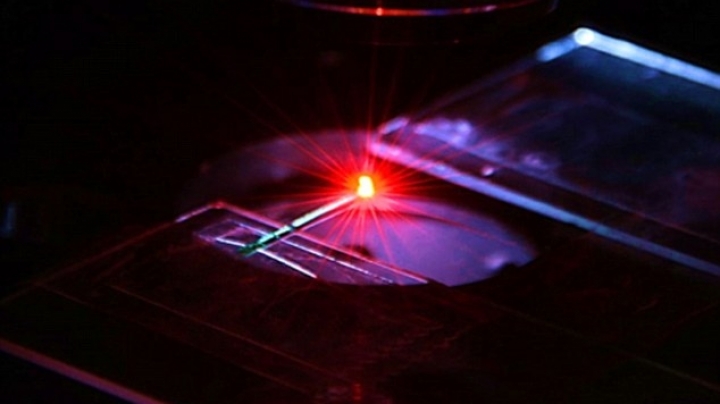 Lasers that use human blood could offer a glimpse into the tiny changes which lead to cancerous tumours, reports Daily Mail.

By shining laser light through blood mixed with a fluorescent dye, researchers in the US have been able to monitor molecular activity and changes to cell structure.

The group believes the process could enable doctors to measure a patient’s response to new drugs, ultimately helping them to better tailor treatments for a range of conditions.

Led by Xudong Fan at the University of Michigan, the team set up a small reflective laser cavity filled with a mix of whole blood and the medical dye Indocyanine green (ICG).

The dye is used in hospitals for a number of diagnostic medical tests, including measuring the output of the heart and for examining the delicate network of blood vessels in the back of the eye.

But the Michigan team says that when ICG is mixed with whole human blood – containing blood cells, plasma, sugars and proteins – it is able to boost the strength of laser signals.

Shining conventional laser light through the sample caused it to emit light, with the team recording the light reflected back out of the cavity.

Analysis of this reflected light revealed structural changes to cells as well as any changes in the blood down to the molecular level.

According to New Scientist, the team believes that the dye will only glow brightly enough when it binds to proteins in the plasma.

As ICG binds to plasma proteins, it should be most visible in areas with high concentrations of blood vessels.

This would mean tumours – which are fed by networks of new blood vessels – would potentially be easier to identify as they would glow brighter compared to other areas.

So far, the team has only been able to use the technique on blood samples outside the body, but in future a test could be adapted for use on tissues inside the body.

The hope is that, in practice, the approach could be used in surgical applications.

This could potentially enable surgeons operating on a tumour to identify its edges, ensuring they remove as much as possible, while limiting the amount of damage to surrounding healthy tissue.