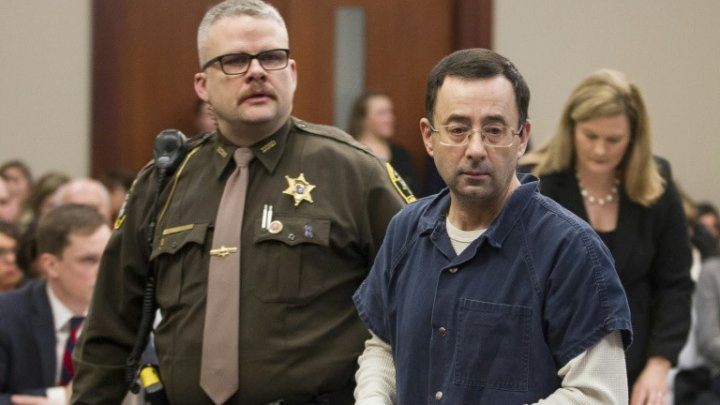 As his victims wept in a Michigan courtroom on Wednesday, disgraced long-time USA Gymnastics team doctor Larry Nassar was sentenced to up to 175 years in prison for abusing young female gymnasts who were entrusted to his care.

Spectators and victims cried, applauded and embraced as Nassar, 54, wearing a dark blue jailhouse jumpsuit, was led out of the courtroom. Rachael Denhollander, the first woman to publicly accuse him in 2016, shared a hug with Angela Povilaitis, the lead prosecutor.

After the sentence was decided, the president of Michigan State University, where Nassar also worked, said she was resigning after facing a barrage of criticism for not doing enough to halt the abuse.

The chief of the U.S. Olympic committee called for all USA Gymnastics directors to resign.

Nassar, who served as the program’s physician through four Olympic Games, apologized to his victims during the hearing, telling them, “I will carry your words with me for the rest of my days.”

Aquilina dismissed his statement as insincere and courtroom spectators gasped as the judge read aloud from a letter he wrote to her claiming he was a good doctor who was manipulated into pleading guilty.

Nassar, who already is serving a 60-year sentence in federal prison for child pornography convictions, also said his accusers fabricated claims to gain money and fame, writing, “Hell hath no fury like a woman scorned.”

“Would you like to withdraw your plea?” Aquilina asked Nassar after tossing aside his letter.

“No, your honor,” Nassar said.

“Because you are guilty, aren’t you? Are you guilty, sir?” the judge demanded.

After a long pause, Nassar said quietly, “I have said my plea, exactly.”