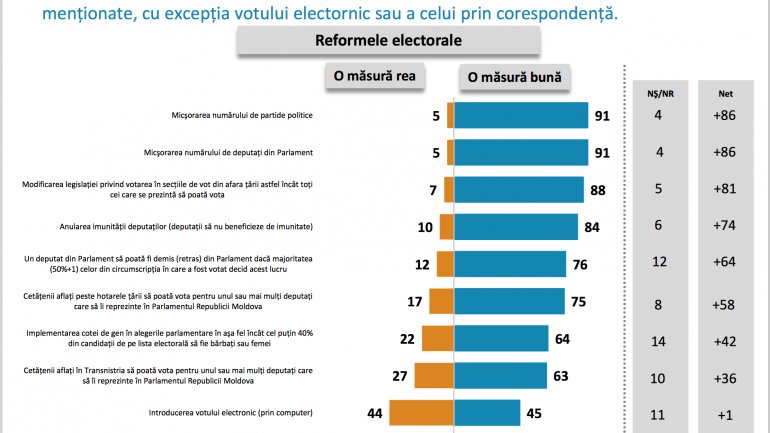 But 29 % of the respondents consider the current voting system needs to be preserved.

They consider the MPs must be elected by uninominal voting system or by a mixed one.

Thus, 40 percent stand up for a uninominal voting system against 17 % who want a mixed system. Only 35% plead for the current voting system based on party lists.

The system wanted by the citizens implies electing the law-makers directly as one elects the mayor of the country president.

The citizens continue wanting to directly elect the president. According this poll’s results, that ratio is 95 to 4.

The poll was carried out in 382 localities, except for the ones on the Dniester’s left bank.

By a large majority of 74 votes out of 101, the Moldovan Parliament passed a bill in the first reading as a compromise between the uninominal and the mixed voting. The draft implies half of the deputies will be elected directly, as the parties will put the other half on their lists.

Although the study clearly shows the citizens want to elect their law-makers directly, a couple of opposition parties and NGOs affiliated to them attempted to organize protests spearheaded at the citizens’ will to vote directly the lawmakers.

The manifestations failed however as only the representatives of the ones having staged them did come.