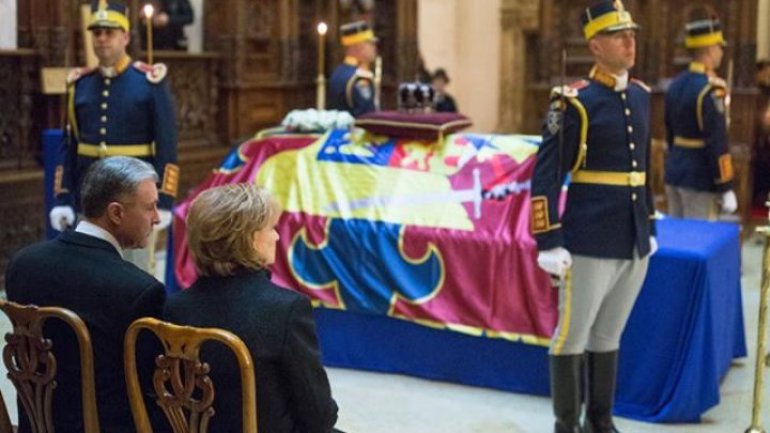 King Michael is on the last road. The funeral ceremony starts in the morning, from the Royal Palace to the Curtea de Arges Monastery.

The ceremony will be attended by members of the Royal House, officials, as well as citizens wishing to pay their last tribute and to spend it at their place.

The detailed program of the funeral of King Michael I of Romania.

14:35. Baneasa Royal Station -at the station, the 30th Guard Brigades take over the coffin and cross through the railway station to the platform, where the Romanian Gendarmerie in the ceremonial uniforms will honor and entertain funeral marches until the coffin is introduced into the mortuary carriage.

17:30. The train station in Curtea de Argeş - The Royal Train arrives at the Train Station in Curtea de Arges. The 30th Guard Brigade Militants, from the mortuary carriage, will hand over to other soldiers, the coffin and the cross. The Royal Family will follow the coffin, in order of precedence. At the exit of the station, they will be in front, the Guard of Honor and the Military Music. The coffin and then the cross will be introduced into the mortuary car and the funeral cortege will move to the Curtea de Arges Cathedral.

18:20 - 18:30. Curtea de Arges Cathedral - The military entered and took over the coffin and cross and moved to the New Archbishopric and Royal Cathedral, followed by the funeral cortege. Only the Romanian Royal Family will enter the Cathedral.

18:40. The New Cathedral in Curtea de Arges - When the coffin descends to the crypt, the soldiers leave the Cathedral. At this point, 21 cannons will be fired by the 30th Guard Brigade. At this moment, the National Anthem and the Royal Hymn will be played.