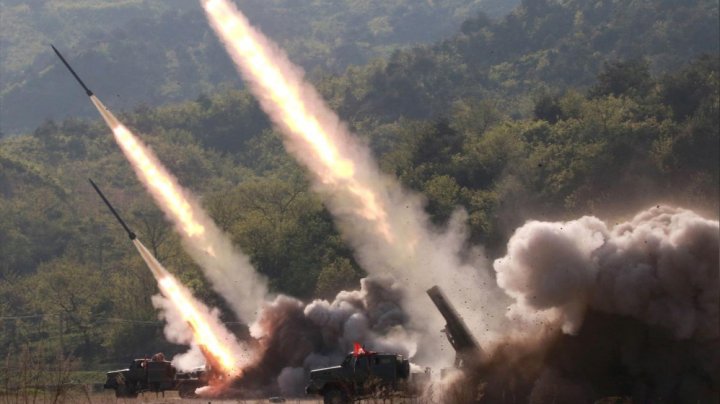 The leader of North Korea ordered its military to boost its strike capability as he directed another missile firing, state media said on Friday, as tensions grew over tests that appeared to show development of a new advanced missile system, wrote reuters.com.

The increased tensions come amid a gridlock in dialogue after the second summit between Kim and U.S. President Donald Trump collapsed over U.S. demands for Pyongyang’s nuclear disarmament and Kim’s demands for relief from sanctions.

“(Kim) stressed the need to further increase the capability of the defense units in the forefront area and on the western front to carry out combat tasks and keep full combat posture to cope with any emergency,” KCNA news agency reported.

He noted “genuine peace and security of the country are guaranteed only by the strong physical force capable of defending its sovereignty,” KCNA said, adding he “set forth important tasks for further increasing the strike ability.”

The test of two short-range missiles on Thursday and the firing of a series of projectiles on Saturday were the first missile launches by the North since an intercontinental ballistic missile (ICBM) in November 2017.

Kim later declared the building of its nuclear force was complete and went on to hold three summit meetings with South Korean President Moon Jae-in and two with Trump.

Both Trump and Moon said the latest missile tests were not helpful but suggested they would not scupper dialogue.

“I know they want to negotiate, they’re talking about negotiating. But I don’t think they’re ready to negotiate,” Trump told reporters.

“They were smaller missiles, they were short-range missiles,” he said. “Nobody’s happy about it but we’re taking a good look and we’ll see.”

South Korea’s Moon said on Thursday the tests were likely a reaction to the failed second summit with Trump in Hanoi in February, but he thought North Korea remained hopeful of continuing negotiations.

The latest tests were swiftly followed by U.S. test-launches of the intercontinental ballistic missile Minuteman III over the Pacific and the Trident II submarine-launched ballistic missile (SLBM) off Florida.

They also coincided with a visit to the South by U.S. special envoy for North Korea Stephen Biegun, who met his South Korean counterpart and was scheduled to hold talks with presidential Blue House and Unification Ministry officials.

During his meeting with South Korean Foreign Minister Kang Kyung-wha on Friday, Biegun said “the door is still open for North Korea to return to the negotiating table,” and that it is very important for South Korea and the United States to continue communication and cooperation, the ministry said in a statement.

Thursday’s missiles were fired from Kusong, northwest of the capital Pyongyang. One missile flew 420 km (260 miles) and the other 270 km (168 miles), both reaching an altitude of about 50 km (30 miles) before falling into the sea, South Korea’s military said.

North Korean state media did not give details of the missiles.

Japan, which is also in striking distance of North Korean missiles and saw them fly over its territory before Kim’s self-declared moratorium on long-range missile launches in April 2018, said on Friday the latest missile tests violated U.N. resolutions.

China, the North’s main diplomatic backer, said it had no firm information on the tests. State Councillor and senior diplomat Wang Yi said Korean peninsula issues should be resolved through dialogue with the goal of denuclearization.

Analysts said the multiple tests signaled that North Korea is serious about deploying an operational fleet of the missiles, which could be used in the opening hours of any war with the United States and South Korea.

Washington has given no sign it will budge on the North’s demand to lift some sanctions as it announced on Thursday the seizure of a North Korean cargo vessel that it said was involved in the illicit shipping of coal.

The Justice Department said the 17,061-tonne Wise Honest is one of the North’s largest cargo ships and it was first detained by Indonesia in April 2018 but is now in the possession of the United States. The announcement has no connection with the North’s missile activities, a U.S. official said.