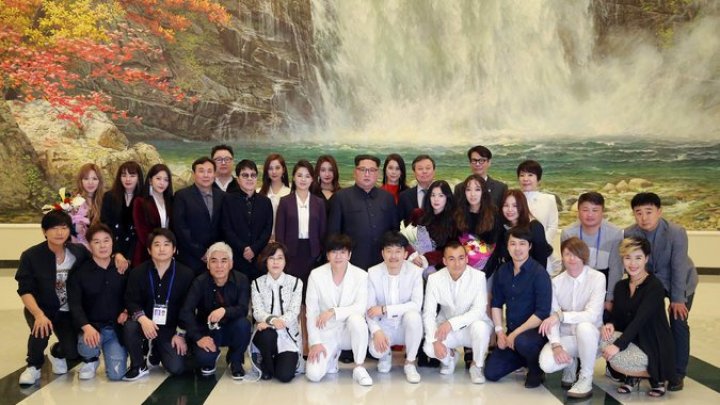 The appearance by North Korea’s leader, Kim Jong-un, on Sunday at a concert by South Korean musicians in Pyongyang was all the more unusual because his authoritarian government has been struggling to stave off what it sees as an infiltration of the South’s pop culture among his isolated people.

But Mr. Kim shook the hands of members of South Korea’s most popular girl band, Red Velvet, which he and his wife, Ri Sol-ju, watched from a balcony.

The two-hour show at the East Pyongyang Grand Theater was part of a political détente between the neighboring countries as relations have thawed.

It was the first time a North Korean leader watched a South Korean musical performance in the North’s capital.

The performances by the South Korean troupe that flew in on Saturday with great fanfare to Pyongyang were done in the name of international diplomacy.

The show occurred just weeks before Mr. Kim is scheduled to meet with South Korea’s president, Moon Jae-in, at a border village on April 27, and ahead of a planned summit meeting with President Trump in May.

South Korean officials said the North did not attempt to reject any of the South Korean song lineup or change the pop stars’ lyrics or risqué dance moves.

The South Korean culture minister, Do Jong-hwan, told reporters in Pyongyang after the show that Mr. Kim “showed much interest during the show and asked questions about the songs and lyrics.”

Mr. Kim’s acceptance of Red Velvet and South Korean pop culture was striking because his government has stepped up a crackdown on DVDs and computer thumb drives containing South Korean pop songs, movies and TV dramas smuggled from China, calling for establishing “mosquito nets” to keep out “decadent capitalist influence.”

Defectors from the North have said that those who were caught selling or watching South Korean K-pop music videos could be sent to prison camps.

Though it was Mr. Kim’s first known K-pop experience, his father, Kim Jong-il, watched a South Korean female singer perform in a provincial town in North Korea in 2001.