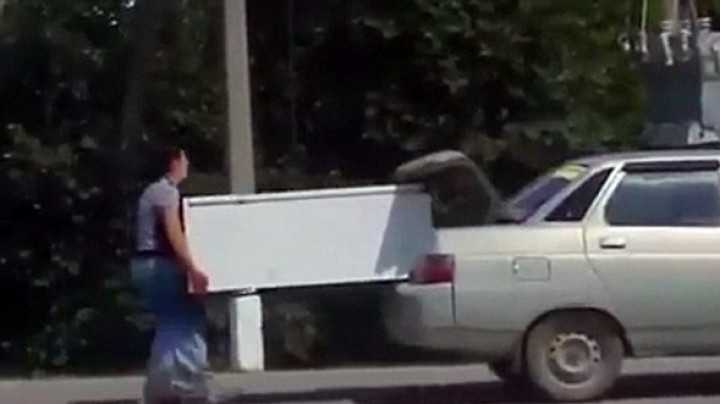 A man in Kazakhstan has been filmed using his girlfriend in true Borat-style by getting her to run along behind his car carrying a fridge, reports Daily Mail.

The video was shot and posted online under the title 'Kelinka from Kazakhstan carrying a fridge behind the car'.

Kelinka is the term used to describe a woman who has a reputation of being able to do a wide variety of jobs.

And that seems to include doubling up to carry a fridge by running behind the car and acting as if it is the most ordinary thing possible.

The bizarre footage shows one end of the fridge in the back of the Russian-made car, but it is clearly much too large and can only really rest on the boot.

As a result the woman is walking along behind carrying the other end of it, in footage that quickly went viral in the central Asian country.

Commentators online found the situation both funny and sad. Many felt sorry for a woman who was doing such a task, while others praised her ingenuity in solving the problem.

Others expressed their negative opinions about the driver of the car and the author of the video, who rather than help the lady, continued driving while filming at the same time.