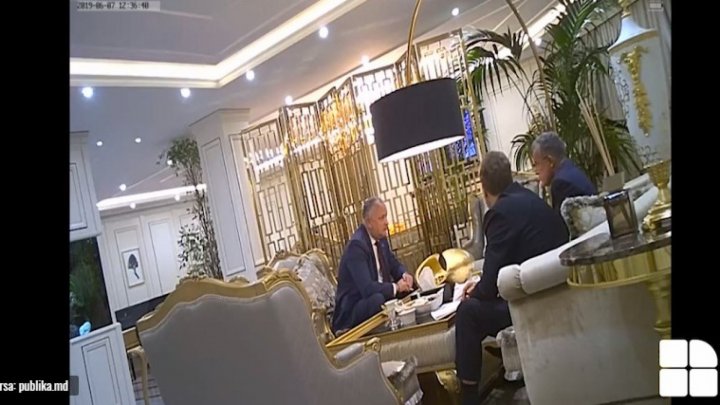 The day of June 7, 2019 will enter in the history of Moldova, because Dodon sold the country. Then, at DPM headquarter, he told Vlad Plahotniuc, DPM chairman about his plant sot federalize the country. At the same time, Igor Dodon recognized that Russia pays him one million USD monthly.

Video 1 Transcription of the dialogue between President Igor Dodon and Vlad Plahotniuc, Chairman of the Democratic Party

Topic: Federalization of the Republic of Moldova

VP: Under what requirements, the coalition is possible? PSRM expectations? Expectations of Russian Federation? Special clauses and it is conditioning you, separately.

VP: It must be already signed? As per calendar…

ID: I am telling you the requirements: we must sign the agreement, me and you, that will be at the Embassy venue, under the Russian Federation Ambassador presence.

Another option, the signing of the agreement should be made in his presence (Russian Federation Ambassador), in front of him, at the Presidency. Because here (at the Democratic Party venue) it will not possible. We can call him to come here (at the Democratic Party venue), but I don’t know how to do that… before the Republican Council (of Socialist Party).

VP: Are these their (Kremlin Administration) requirements?

VP: The signing of the agreement. What we’ve discussed or there is something else?

VP: The signing of the Agreement in the presence of the (Russian) Ambassador. For him to see…

VP: I see. It is not good…because the leadership of PSRM (socialists)... regarding the format I mean, me and Greceanyi (chairperson of socialists) should sign.

ID: You will sign with her after, later. What we sign now, also includes some clauses which are not possible to write in the open agreement.

ID: That is why we are signing this agreement. And we agree on it, just two of us, not on behalf of parties, this is different.

VP: I agree. I write these down first, because I start from a blank page. What are the expectations of PSRM (socialists)? as well, I write here down - Russian Federation? These still belong to Russians.

ID: ..should be in the public Agreement that should be signed by you and Greceanyi today.

VP: then, I name this one as confidential?

VP: and number two: the signing of ….

ID: ...Memorandum, Agreement... They should sit and think how to name it.

VP: ..between the parties this time, respective, between me and Greceanyi. Is that right? With the similar content?

ID: maximum what could be... because this one will be public.

VP: Ok. Public. One sec. Public. This one will be public. Ok…with the similar content, it is desirable.

ID: You said that you agree with the similar content except one clause.

VP: with the similar content..the agreement. Now tell me what is there, with what they agree: identic and what the clauses are, or they insist on all of it?

VP: Ok, let’s see. A similar content of the agreement with the possibility of renaming... you have discussed one clause, haven’t you?

SI: Instead of federalization to be written special status with wide legislative authority…

VP: You are reffering to this word

SI: It was written there.

ID: And, after all, we still didn’t agree on this Agreement, regarding Ministries (government portfolio), what they insisted on…

VP: Just one second. Instead of the federalization concept, you are talking about “federalization”..I agreed to name it…How Serghei?

ID: There is a formulation.

VP: Should we write it in Romanian language?

ID: There is an word-formulation. I don’t have it right now. It’s just in Russian language.

VP: But we will write the agreement in Romanian..no need to be written in Russian too..they’ll freak out..

ID: Let’s write it so, the guys will sit and translate it...

VP: Ok,  I will write it down in Russian language. Special status...

VP: wide, and what more?

ID: I’ve checked it. We gave it similar to the case of the Gagauz minority, maybe even less.

ID: in the political, economical, social and cultural areas.

VP: ..areas. Done. This is the part of the agreement. Is there anything else specific?

ID: Regarding the Ministries, too…(Government portofolio).

VP: Ok, let’s see. Is it their too (the Russian requirements in the list)?

ID: It is from there too.

ID: He (Kozak) told me: `Vlad said that you can be unified in one. You can stay together (in a coalition). What is the difference? You will color somebody in red. Because there is a need to show. This myth of Ministry of the Interior, that Democrats call on the demand of the Socialists to the right wing.

VP: And what is the difference: as soon as we are as “one” (in a coalition)?

ID: I am telling you ..(meaning that “Kozak told me that”)

VP: To understand: which is their (Russians) last version of the formula?

VP: Tell me to the end. I will not go alone. I want to see their (Russians) expectations and yours.

ID: Let’s do it so: Deputy Prime Minister for Reintegration…

ID: ..of Ministry of Defense…

ID: And Ministry of Interior. This is what we have asked public, from the right wing (ACUM Bloc).

VP: Ministry of Interior. Next?

VP: Nothing else? Or after you talk, you will come with other requirements, give us also this, and that. Let’s better get through the entire list.

ID: No. You and I have discussed separately about the Constitutional Court..

VP: I want to discuss it all.

ID: ..about Moldova Gaz. Everything regarding these we have talked separately.

VP: No. I want to discuss all, because, I say it again, you have a theory of yours that you have learned somewhere, but definitely not from us. You take something now. But after, you’ll ask “what do you give us more?”. Can we see the entire list? Because I want to talk to the guys (Permanent bureau of the Democratic Party) and I don’t want to bluff. I want to write it down for the last time, so you won’t come again to ask for more. Can we go for entire list for the last time?

ID: The list will be in the agreement and must be signed.

VP: This means it will appear before the signing of the agreement. I want it all on the table now, all the obligations that I have.

ID: Nothing will appear here, except for what I’ve just said.

VP: Ok, let’s do it one more time. What we have discussed and what do you consider it is good for you to take? I want to make all the calculations. Is that correct or not?

ID: That is correct.

VP: Let’s put it differently. I want to avoid the possibility of new requirements after each signing, after each discussion. I said it simple and short. Because you have such a theory: give me now what you can, I take it, but what can you give me more? You want to sign and decide. Let’s not make it longer. Let’s not hide under the table! Just let’s write down the entire list. I want to see the full list.

ID: Ok. In the agreement it is also written about the President, about the Speaker.

ID: But it is written in the Agreement. It is written about the return of the competencies to the President, SIS and all the others.

ID: Should we write it again?

VP: No, no, no. I am writing it down for me. I want to talk to my guys (Permanent bureau of the Democratic Party) now, I am gathering for a meeting with Permanent bureau of PDM. How do you think? (ironically): Should I tell them now about these requirements or let them find out later? (laughing).

ID: Obviously, you should tell them.

VP: till now have not showed preliminary (Russian requests) to others.

VP: Nothing to no one. Why? So nobody can trick us, because I have not the certitude with what is coming from Moscow, I can’t present till now to Permanent Bureau (of Democrats) this proposals. It’s logical and this is how we agreed. Serghei knows it, because he knows a bit more details and has more experience than others. Cebotari has participated to some discussions and should know about this. In rest, nobody knows anything about next stapes. I called them (the Permanent Bureau) at 2 o’clock and I want to tell them all the same, everything. But I don’t want it after saying “Yes, ok”…

VP: One more time. I can gather Permanent Bureau earlier. There are six members.

VP: I don’t have a problem with that. I can gather the Permanent Bureau even earlier. But I want to tell them everything…and one more thing. Let’s finish it today! Do you agree with that?

VP: Let’s write everything down. I am writing down, the first thing to be done, because we should do all of these. I need to tell them ( the Permanent Bureau). This is our promise.