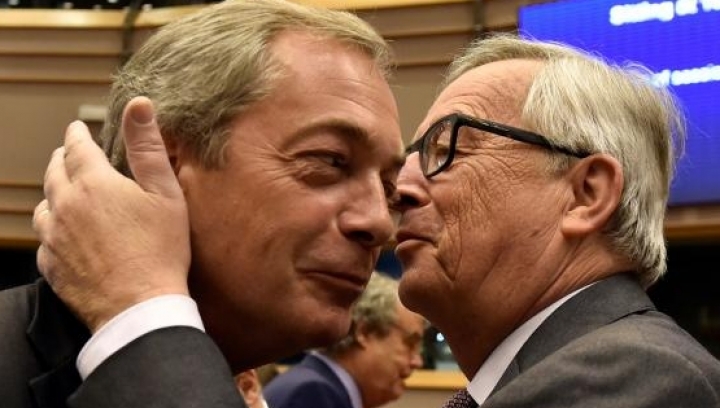 “Why are you here?” Jean-Claude Juncker asked Ukip MEPs as the European Parliament met to discuss the UK’s vote for a Brexit.

Nigel Farage was among the British representatives present for the debate, which quickly became heated as Brussels continues to reel from Friday’s result.

Mr Juncker, the President of the European Commission, turned on Ukip MEP Paul Nuttall who clapped after he pledged to respect Britain’s wishes.

“That’s the last time you are applauding here,” he said, to enthusiastic applause from MEPs.

“And to some extent, I’m really surprised that you are here. You were fighting for the exit, the British people voted in favour of the exit, so why are you here?”

"It's a pleasure," Mr Nuttall replied.

Mr Farage, sitting to the right of Mr Juncker with a Union flag on his desk, laughed during the exchange.

“Our British friends have expressed their view by universal suffrage and the majority view of the British people demands respect,” he added. “Democracy is democracy and we must respect it.”

Before the session opened he was seen in conversation with Mr Farage, who grimaced after receiving a kiss on the cheek, The Independent writes.