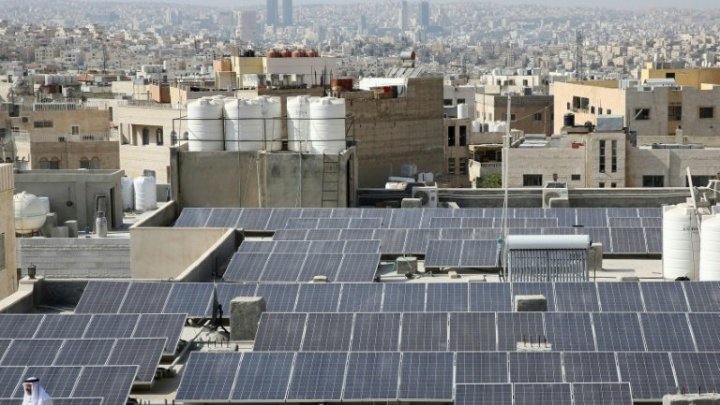 Around 1000 mosques have switched from traditional power to renewable energy in Jordan.

However the King Abdullah Mosque, in the heart of Amman, still uses traditional sources of energy.

In this mosque, so far, no solar panels are to be seen.

But the nearby Prince Hamzeh Mosque, on the other hand, has a number of them installed on its rooftop.

And the Jordanian Awqaf and Islamic Affairs Ministry has decided to include another 5500 in the coming few years as long as they receive enough funds to finish their solar energy projects.

There are 6500 mosques in the the Kingdom and in time the Islamic Affairs Ministry hopes to make them all energy efficient.

Dr. Hamzeh Ibdah, Head of Mosque Affairs for the Awqaf and Islamic Affairs Ministry, says it started to install solar panels at mosques in 2014 and around 1000 mosques have now made the switch to solar energy.

Ibdah adds that the solar energy reduced their electricity bill to zero in some of the mosques.

"In terms of economic feasibility (of solar panels) this is great. The electricity bill has declined in general, and the ministry has noticed this at mosques which run on solar energy. At some of these mosques the bill was even zero."

The ministry also has details of mosques which consume the most energy and have high electricity bills.

Many worshipers at the mosques rely on electricity to power ceiling fans and air conditioners.

But to convert all the mosques to solar power requires a lot of funds.

The ministry contributes 20 - 25 percent of the total cost, while 25 per cent is being paid by the Energy Ministry. The rest comes from donors' contributions.

According to Ibdah, the total estimated cost for the whole project can range from between 50 to 55 million dinars (70.521 to 77.574 million US Dollars).

The main reasons for switching to solar energy are the high prices of electricity in Jordan.

Professor Ahmed Al-Salaymeh, an expert in renewable energy, says that Jordan has one of the highest prices in electricity in the world compared with the population numbers.

"Electricity prices in Jordan are high. If we want to compare the prices of electricity here, it is possible that you will find it is the highest in the region and in the world. Prices in America and Europe don't reach the level we have, especially for the top consumers," says Al-Salaymeh.

But he also believes that Jordan should invest in solar power because of its sunny climate and harness its natural resources.

This will also make economic sense, he says.

"From an economic perspective, installing solar panels on rooftops of homes, especially for the top consumers, such as mosques, universities, companies and the trade sector, this can become economically feasible," says Al-Salaymeh.