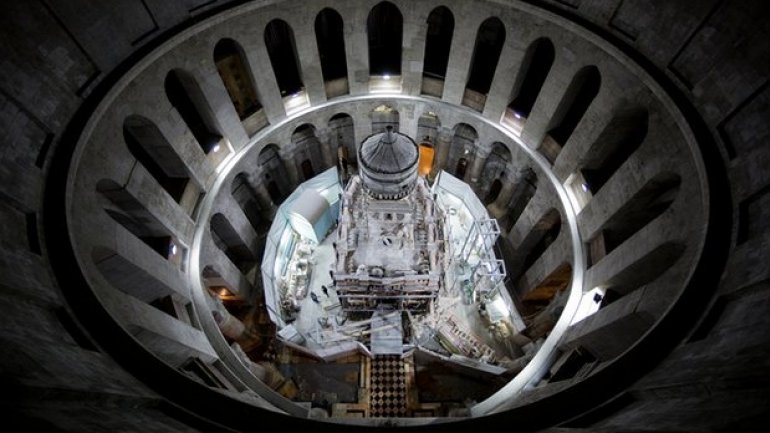 The tomb in which Jesus’s body is believed to have been laid after his crucifixion has been exposed by conservationists for the first time in centuries, reports The Guardian.

A marble slab covering the rock-carved tomb in the Church of the Holy Sepulchrein Jerusalem’s Old City has been lifted as part of a delicate $4 million restoration of the most sacred monument in Christianity, according to a report in National Geographic.

The restoration workers will now be able to examine the original rock shelf or “burial bed” on which Jesus’s body is thought to have rested.

“The marble covering of the tomb has been pulled back and we were surprised by the amount of fill material beneath it,” archaeologist Fredrik Hiebert told National Geographic, which is a partner in the project.

“It will be a long scientific analysis, but we will finally be able to see the original rock surface on which, according to tradition, the body of Christ was laid.”

The tomb is situated inside a structure known as the Edicule, which is being restored by a team of Greek conservationists from the National Technical University in Athens. The team previously worked on the Acropolis in the Greek capital and the Hagia Sophia in Istanbul.

Antonia Moropoulou, the team’s chief scientific supervisor, said the removal of the marble slab, which measures about 3ft by 5ft, was a “critical moment” in the restoration of the Edicule. “The techniques we’re using to document this unique monument will enable the world to study our findings as if they themselves were in the tomb of Christ.”

The church – a huge draw for pilgrims and tourists from all over the world – was closed for the slab’s removal, with the inside of the Edicule lit by powerful industrial lighting instead of the customary flickering candles.

The restoration project, involving about 50 experts, began earlier this year after funding was secured from donors including King Abdullah of Jordan and Mica Ertegun, the widow of Atlantic Records co-founder Ahmet Ertegun, who gave $1.3 m. The Christian denominations that jointly run the church also committed funds. The project is due to be completed next spring.

The conservationists have been working mainly at night in order to allow pilgrims continued access to the shrine. The World Monuments Fund is overseeing the restoration.

The Edicule has been rebuilt four times, most recently in 1810 after a fire. The structure has been held up for almost 70 years by iron girders put in place by a British governor who ruled Palestine in the Mandate era.

The Church of the Holy Sepulchre, in the heart of Christian quarter of the walled Old City, covers the assumed site of Jesus’s crucifixion, burial and resurrection.

In a sign of the distrust between the different denominations, the keys to the church have been held by a Muslim family since the 12th century.