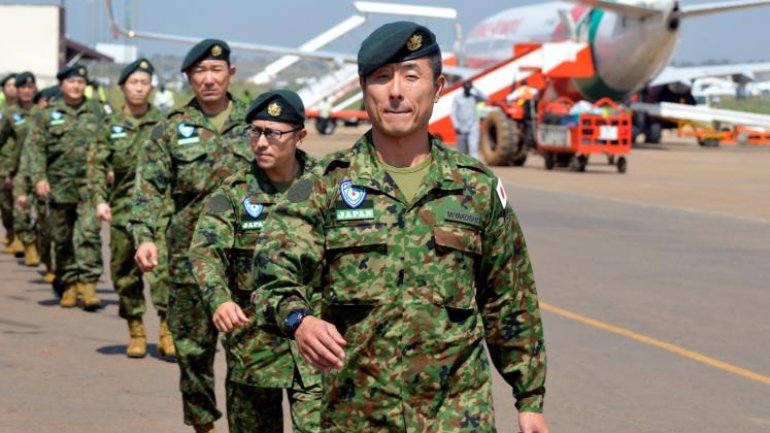 A contingent of Japanese troops landed in South Sudan on Monday, an official said - a mission that critics say could see them embroiled in their country's first overseas fighting since World War Two, reports Reuters.

The soldiers will join U.N. peacekeepers and help build infrastructure in the landlocked and impoverished country torn apart by years of civil war.

But, under new powers granted by their government last year, they will be allowed to respond to urgent calls for help from U.N. staff and aid workers. There are also plans to let them guard U.N. bases, which have been attacked during the fighting.

The deployment of 350 soldiers is in line with Japanese security legislation to expand the military's role overseas. Critics in Japan have said the move risks pulling the troops into conflict for the first time in more than seven decades.

Tsuyoshi Higuchi, from the military's information department, told Reuters in Juba that 67 troops arrived in the morning while another 63 were expected to land in the afternoon. The last of the 350 are expected to arrive on Dec. 15, he said.

South Sudan seceded from Sudan in 2011 - a development greeted at the time with mass celebrations in the oil-producing state. Aid agencies and world powers promised support.

But fighting, largely along ethnic lines, erupted in 2013 after President Salva Kiir sacked his longtime political rival Riek Machar from the post of vice president.

A peace deal, agreed under intense international pressure and the threat of sanctions, brought Machar back to the capital Juba in April, but he fled after more clashes and the violence has continued.