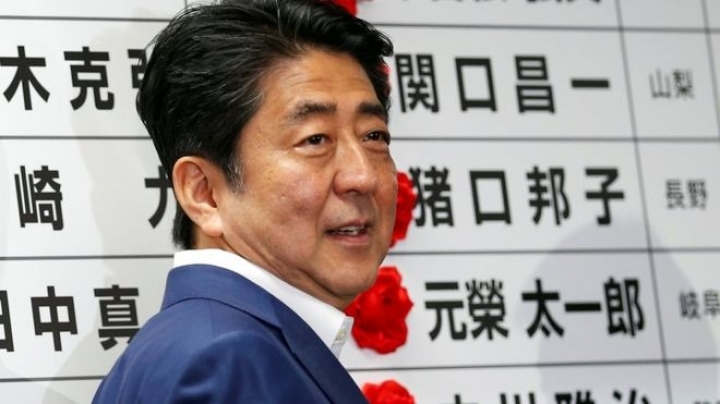 His coalition is expected to win most of the 121 seats in dispute.

If he can achieve a two-thirds majority in the upper house to match that in the lower house, he could also hold a referendum on constitutional change, easing constraints on military action.

However, Mr Abe, from the Liberal Democratic Party, said it was too early to talk about such reviews.

"I have two more years to my term [as LDP president] and this is a goal of the LDP, so I want to address it calmly," Mr Abe said in a TV interview.

Half of the 242 seats of the upper house were up for grabs.

Public broadcaster NHK said Mr Abe's LDP and its junior coalition partner, the Komeito party, would between them take 67 to 76 of the seats available.

If confirmed, this would increase their majority, as the coalition already controls 77 seats of the other half of the upper house.

Final results are expected on Monday.

The prime minister fought his campaign on his economic record, but the sub-text of the election was the power to amend the constitution, the BBC's Stephen Evans, in Tokyo, said.

Mr Abe is thought to want to change Article 9, the so-called pacifism clause which forbids Japan from fighting wars abroad. It was imposed by the US after Japan was on the losing side in World War Two, 70 years ago.

Some in Japan view the constraint as unfair, our correspondent says, and the rise of China has reinforced the view on the right that the clause should go.

The opposition has asked voters to reject any adoption of a more assertive military role.

Mr Abe based his election campaign on his economic policies, although he has admitted himself that his Abenomics, aimed at ending debilitating deflation, are only "half done".

As the votes were still being counted, he said the results indicated a mandate for his economic policies.

"We were given approval for our mandate to powerfully pursue Abenomics. We would like to continue with our efforts to achieve what we have promised," he said.

This was the first nationwide election since the voting age was lowered from 20 to 18.