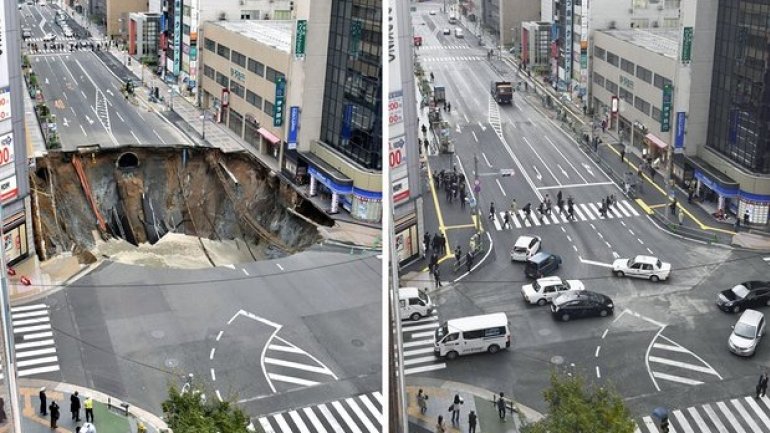 A section of road in the centre of the Japanese city of Fukuoka has reopened just days after a sinkhole opened up outside a busy railway station and threatened to topple nearby buildings, reports The Guardian.

In a typical demonstration of Japanese workmanship and efficiency, workers toiled around the clocks and had practically filled in the section of road in just two days, according to local media.

The road reopened to traffic and pedestrians early on Tuesday after local officials declared the repaired stretch safe.

The week-long rush to reopen the busy stretch of road included repairs to a sewage pipe and replacing traffic lights and utility poles that were swallowed when the sinkhole opened up shortly after 5 am local time on 8 November.

The incident caused power cuts and disrupted phone signals, and gas and water supplies, but there were no reports of injuries.

The mayor of Fukuoka, Soichiro Takashima, said the affected ground was now 30 times stronger than before, adding that a panel of experts would be set up to establish the cause of the cave-in.

Local media reports said the 30 m by 27 m sinkhole, which was 15 meters deep, was caused by construction work on an extension to an underground line.

The Fukuoka workers, who filled the hole with 6,200 cubic meters of sand and cement, drew praise on social media. One person tweeted: “I’m surprised the road reopened in a week!” Another said: “Impressive. That was fast.”

The astonishing speed of the repair work brought back memories of the efforts to reopen roads that were badly damaged by the March 2011 triple disaster.

Before-and-after-photos showed how a team of workers took just six days to repair gaping cracks up to 150 meters along a stretch of road north of Tokyo, boosting attempts by emergency and aid workers trying to reach hundreds of thousands of survivors.