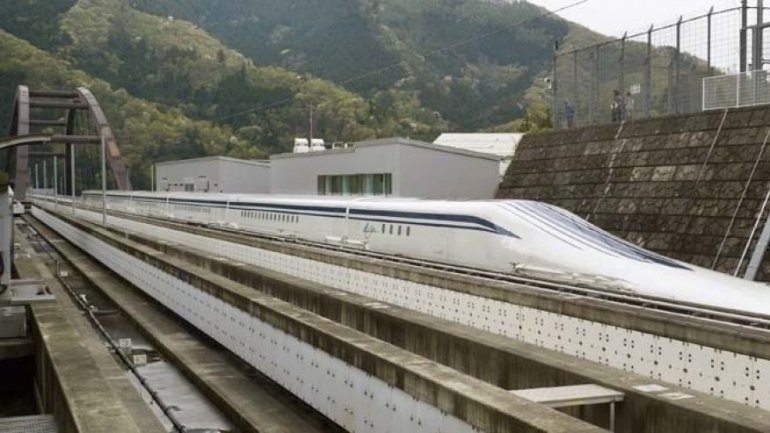 When the record-breaking Shinkansen high-speed rail line opened in 1964, it was perfect timing.

That year Tokyo hosted the Summer Olympics, and Japan hogged the spotlight to debut the world's first commercial bullet train.

In 2020, the Japanese capital will host the Summer Olympics, and if you're getting deja vu that's because the Asian nation is once again shattering rail records, says CNN.

The new Japanese maglev became the fastest train in the world after traveling at 374 miles per hour (603 kilometers per hour) on a test run near Mount Fuji last year, breaking its own world record of 366 miles per hour (590 km per hour), set the previous week.

Maglev trains - already operating at slower speeds in Shanghai and Changsha, in China, and Incheon, in South Korea - use magnetic repulsion both to levitate the train up from the ground, which reduces friction, and to propel it forward.

It is perhaps Japan's boldest rail innovation yet.

The Chuo Shinkansen maglev line will link Tokyo to the southern city of Nagoya in 40 minutes - arguably making the maglev faster than flying, given the time it takes to get through an airport. There are plans to later extend the line to Osaka.

Tomoaki Seki, a manager at the Central Japan Railway Company, which is developing the maglev line, says the company has been testing the technology since 1997.

By the time it opens in 2027, the service will have undergone 30 years of refinement.

Why is developing the maglev line taking so long?

During a test run, in 1997, it had already reached a speed of 342 miles per hour (550 kilometers per hour), but the company says it needed to do more testing to bring the technology to the necessary safety standards, and make it a cost efficient service.

So, how does the 2020 Olympics rail breakthrough compare to the bullet train unveiled for the 1964 Tokyo games?

For a start, they're both somewhat political moves.

It was also an opportunity to show the world that Japan could outperform Western countries in engineering, after the economic devastation it suffered following the end of World War II.

Sure enough, the world took notice.

France swiftly followed in Japan's footsteps installing the Train à Grande Vitesse (TGV) in the 1970s, which set speed records in 2007. The Intercity-Express, which began service in Germany in 1985, still operates between major cities in the country; its trains are among the fastest high-speed trains in the world.

For Japan today, the need to revive its pioneering rail reputation is crucial.

With a world record to its name, the maglev - although not operational until 2027 - heralds a new era in Japanese engineering.

The 2020 Olympics provide the perfect chance to highlight this achievement to the world.

It could have economic consequences, too. Japan is looking to sell the technology to the United States, Seki says.

"Japanese prime minister Shinzo Abe is a big fan of this project. He's proposing a route from Boston to New York, [at a speed] equivalent to Tokyo to Nagoya."

As well as speed, Japan as an impeccable international reputation for safety.

Seki says members of the public have been offered test rides on the maglev, and feedback has been positive, with riders commenting that the new train ride feels "very smooth".

Passengers on the maglev, plus residents of nearby cities, need not worry about noise pollution, due to Japan's strict noise regulations.