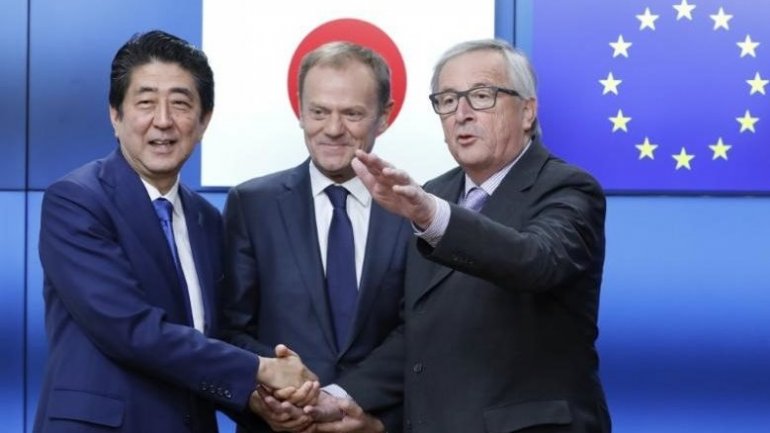 While President Trump talks tough on trade, Europe and Japan are getting on with business.

Negotiators from the European Union and Japan say they're close to striking a major free trade agreement that could jump-start talks for other potential deals.

"An ambitious EU-Japan deal would send a powerful signal to the rest of the world that two of the largest economies are resisting protectionism, in favor of openness, of trade and investment," Cecilia Malmstrom, the EU's top trade official, said this week.

The EU and Japan, which together account for more than a quarter of the global economy, traded roughly $140 billion of goods last year, according to EU data. The deal they are negotiating now would help boost that number.

Japan wants to remove high EU tariffs on products such as cars and electronics, and is also seeking lower regulatory hurdles for Japanese companies doing business in Europe. The EU is pushing for improved market access for agricultural products and lower tariffs on food products such as cheese, pasta, pork and wine.

An agreement could put some U.S. businesses at a disadvantage.

"If the Japan-EU agreement is reached, Europe will be able to export agricultural products like pork and cheese to Japan with lower tariffs," said Junya Tanase, head of Japan foreign exchange research at JP Morgan. "This means that the U.S. agricultural sector will face some disadvantages in the competitiveness of exports to Japan."

The U.S. had its own chance to gain better access to markets in Japan, the world's third largest economy, through the Trans-Pacific Partnership (TPP), the trade deal designed to reshape trade around the Pacific Rim. But Trumppulled the U.S. out of it at the start of his presidency, much to the dismay of Japan and other signatories.