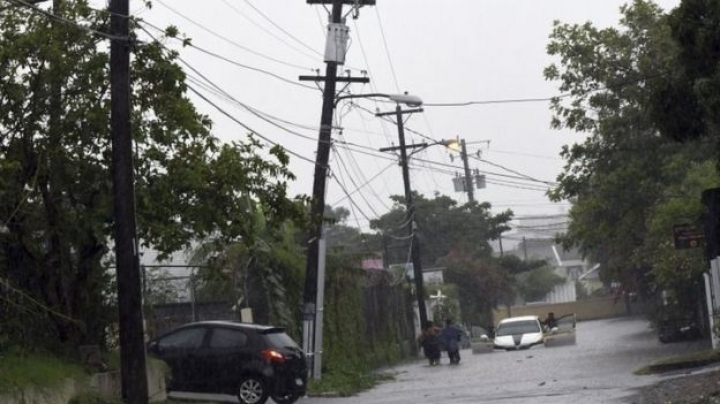 A ferocious hurricane packing 130-mph windsis threatening to wreak havoc on Haiti and Jamaica as it trudges through the Caribbean Sea, reports CNN.

Hurricane Matthew, a slow-moving storm now within roughly 300 miles of Jamaica and Haiti, is expected to dump dozens of inches of torrential rainfall on both islands starting Monday. After that, Matthew is expected to plod north toward Cuba, where it's expected to make landfall near Guantanamo Bay Tuesday night.

"This rainfall will produce life-threatening flash floods and mudslides," the National Weather Service said late Sunday night. "Preparations to protect life and property should be rushed to completion."

The National Weather Service reported Monday Matthew could dump up to 25 inches of rain on southern Haiti - including 40 inches in isolated areas.

Matthew will likely make landfall sometime after Monday night just off the western tip of the Tiburon Peninsula, the National Weather Service said. The storm surge is expected to reach 10 feet along the coastline. Rainfall of up to nearly two feet could lead to major flooding and trigger perilous landslides.

The US State Department issued a travel warning Sunday urging Americans in Haiti to leave as quickly as possible.

Over the weekend, Jamaican officials opened storm shelters ahead of the nation's first major hurricane since Gilbert in 1988.

After Haiti and Jamaica, Matthew is expected to move north toward Cuba and make landfall by Tuesday night, maintaining winds of more than 100 miles per hour, the National Weather Service said.

The storm could be brutal for Cuba, where many houses appear too weak to withstand a hurricane, CNN's Patrick Oppmann said Sunday.

Military trucks raced around the island's second largest city to finish preparations. Four years ago, Hurricane Sandy ripped through the city, downing trees, power lines and killing 11 people in the area. To prepare in advance, residents spent Sunday securing their roofs and collecting cash wired from relatives in Florida.

Some people left coastal areas for government shelters, while officials warned inhabitants of the Sierra Maestra mountains of possible mudslides.