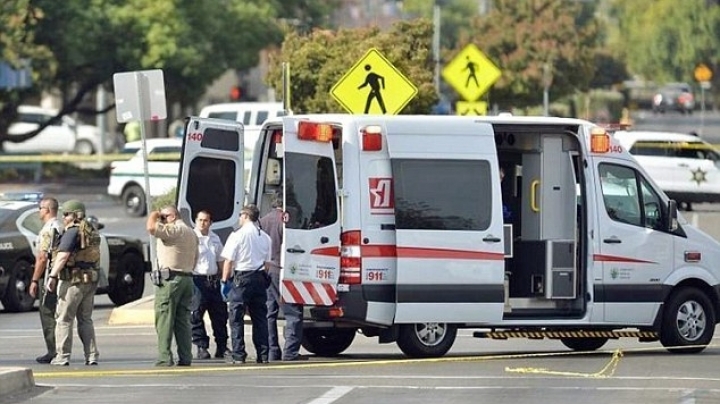 The incident started when suspect Thong Vang, who was visiting someone at the jail, entered the lobby, the Fresno County Sheriff's Office said.

He tried to cut to the front of the line, but a correctional officer at the front desk told him to wait his turn, it said.

At that point, the suspect started pacing back and forth near a metal detector that leads to a secure area of the jail, authorities said in a statement.

Davila and Scanlan told the suspect to take a seat, but he allegedly refused and started struggling with them. The suspect then pulled out a gun and shot the officers, according to authorities.

"The suspect dropped his weapon and was held at gunpoint while other deputies rescued the two injured correctional officers by dragging them out of the lobby to ambulances waiting outside," the Sheriff's Office said.

Deputies detained Vang and took him to a hospital with minor scrapes and cuts. He was charged Saturday night with attempted murder, possession of a firearm by a felon and bringing drugs in jail, court records show. It was not immediately clear who his attorney was.

The suspect is a known gang member and a registered sex offender, according to authorities.

"In 1998, he was sentenced to 19 years in prison on multiple rape charges involving teenagers aged 14 and under. He served 16 years of his time and was released on Sept. 4th, 2014. He has not had any criminal violations until today," the Sheriff's Office said.