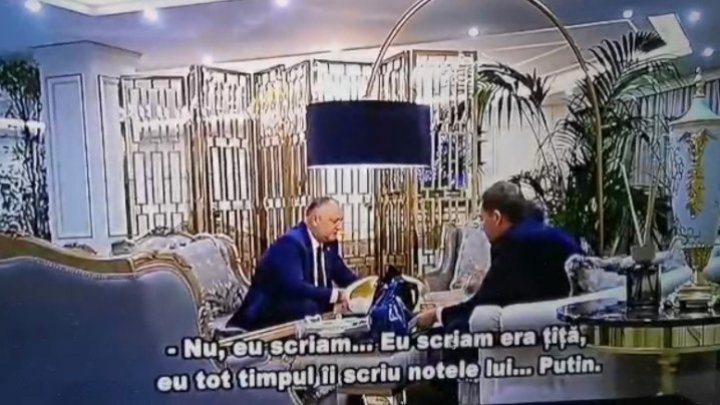 PPDA MP Iurie Reniţă made public two more video recordings of President Igor Dodon and former democrats Vlad Plahotniuc and Serghei Iaralov. During the discussion, the head of state said he was sending notes to Vladimir Putin about the political situation in Moldova.

In one of the recordings, Igor Dodon, Vlad Plahotniuc and Serghei Iaralov seem to be writing a text to announce a possible parliamentary coalition. At one point, Dodon admits to writing notes to his Russian counterpart.

Dodon: I was writing. I always write notes to Putin.

Dodon: Parliamentary coalition from ... two parties, from the democratic party.

Plahotniuc: Comprised of the two (parties).

In the second recording, Igor Dodon and Vlad Plahotniuc discuss the then Russian Deputy Prime Minister, Dmitry Kozak, who was in Chisinau before the formation of the coalition between PSRM and the bloc ACUM.

Dodon: Kozak spoke with me today.

Plahotniuc: I saw him today and he is not so gentle.

Dodon: Yes, he is not gentle and will never be gentle.

Plahotniuc: We just snapped at each other.

Dodon: I used to shout at him in the office and there were other people by his side.

Dodon: We have to admit he's fine, he's a negotiator.

Plahotniuc: He does everything for his country.

Dodon: And he does it right.

Deputy Iurie Reniţă stated that he would notify the Prosecutor's Office once again about the new videos.

"It is an indisputable act of treason when you publicly admit that you got involved in the Russian secret services, apparently, the noble mission of removing the odious Plahotniuc or writing him informative notes, a kind of" doklodnaia "directly to Vladimir Vladimirovich Putin." said Reniţă.

Shortly afterwards, the General Prosecutor's Office issued a press release stating that the video recordings would  be examined during the same criminal trial, initiated based on the denunciations submitted by the leader of the DA Platform, Andrei Năstase and the deputy Iurie Reniță.

After the recordings appeared, Igor Dodon acknowledged their veracity on Facebook, writing that the talks took place last summer, during the negotiations for the formation of an alliance between PSRM and PDM. The head of state compared these talks to a chess match, ending with a checkmate. Vlad Plahotniuc and Serghei Iaralov have not commented on any of the videos in which they appear in private discussions with Igor Dodon.