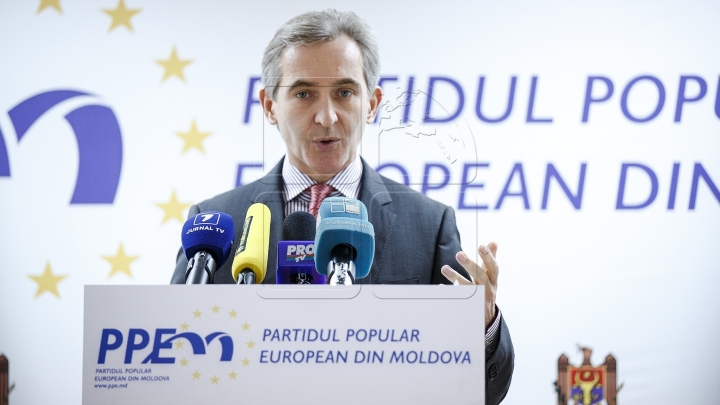 The president of Popular European Party, Iurie Leanca, is laughing at the idea of the sole nominee of the right side for the presidential elections, which failed.

“As you said, the sole nominee is called Maia-Nastase. I announced for a few times that the negotiations were acted and they never wanted a sole nominee. Today, there is no sole nominee of the opposition from the right side because they did not want it. What Maia Sandu and Andrei Nastase told you two weeks ago, that they will have a sole nominee, was just a cheap demagogy. These people cannot understand each other for a simple reason: one is not allowed by the master, the other needs a place to work because it is staying for a few months and cannot find an occupation after leaving the position as minister. Both are playing the card of life, they dreamed of this position too much to give up” declared Iurie Leanca after the meeting of the National Political Council of PPEM.

Also, he says that the two persons: Nastase and Sandu have started their way to presidency with a big joke and a mockery towards people.

“There is another problem: these two persons who lied to the national that they will have a sole nominee want to be presidents? They have started their path to the Presidency with a big joke and mockery towards people. Now they will come and say that even though they have announced their nomination, they still can give up before the elections and to come with a sole nominee, which means another mockery towards the nation. These two demagogues have criticized me when I said that they are faking the negotiations and today you can see the truth. I think that people can draw important conclusions regarding the seriousness of these two nominees” said Leanca.

Today, Iurie Leanca was named as the nominee of the Popular European Party for the elections on 30 October 2016 in which will be elected the new president of Moldova: “I am running in order to continue what I started with the liberalization of visas and the signing of Association Agreement with EU. I am running in order to further develop Moldova on the European path.”

At the same time, during today’s event was formed the initiative group for the collection of signatures of the supporters of the PPEM nominee, and the deputy president of the party, Ruslan Codreanu, was voted as the president of this group.