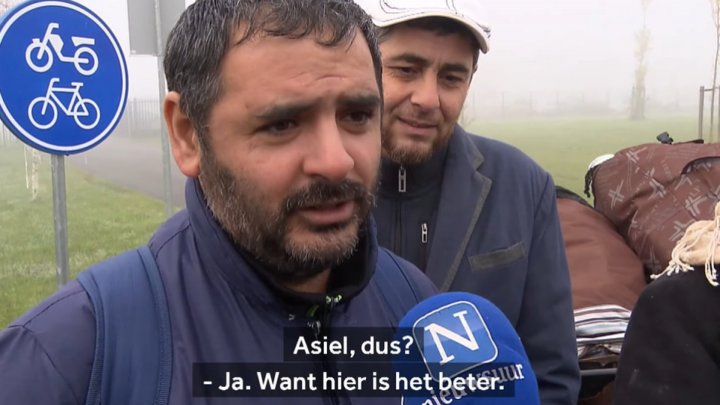 "It's hard to live in Moldova, there's no job, we must look for new ways to live, with the children, with the family", said Moldovan asylum seekers who came to Netherlands by a bus. But their plan broke down after that bus carrying 65 Moldovan nationals, including children was intercepted by the local police.

Asked by Nieuwsuur journalists what were their expectations, they answered "to be granted asylum. It's better here".

The Dutch reporters also tried to find out the cost for "better life" in Netherlands.

"We came here by bus. There (in Moldova) we don't have jobs".

"We are seeking better life here".

"We didn't pay any money. I came with other friends who will travel to different countries", answered asylum seekers.

They were planning to report to the refugee reception centre in Ter Apel, Netherlands when the border police caught them on Nov 20.

The police were alerted by asylum centre staff when they saw a group of some 20 people leave the bus and walk towards the centre. It had been parked some 500 metres away.

It was the second time within a week that a group of Moldovans had been picked up by police.

Last Friday 19 people were found in a bus without proper papers and the 34-year-old driver was arrested.

In August, another group of 10 were found in a minibus.

In total 204 Moldovan nationals claimed asylum in the Netherlands in October, making them the second biggest refugee group behind Syrians. So far this year, 851 have claimed asylum, almost as many as in 2018 as a whole.