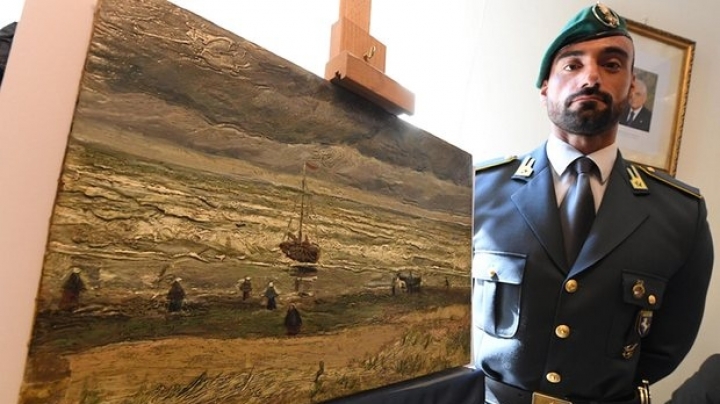 Two Vincent van Gogh paintings that were stolen from a museum in Amsterdam more than a decade ago have been recovered by Italian authorities in Naples following a sting operation that targeted organised crime, reports The Guardian.

The paintings, View of the Sea at Scheveningen, painted in 1882, and Congregation Leaving the Reformed Church in Nuenen, painted in 1884, were recently discovered after allegedly being hidden away in one of the houses of an international drug trafficker based in Castellammare di Stabia, near Naples.

The authenticity of the paintings has already been confirmed by an expert from the Van Gogh Museum in Amsterdam, from where they were stolen in 2002.

Axel Rütger, director of the Van Gogh Museum, said he wasn’t sure when the paintings could be returned to the Netherlands, as they are likely to be needed as evidence in the ensuing trial.

The frames have been removed and the seascape has a small patch of damage in the bottom left-hand corner, the museum said, but otherwise the paintings appeared to be in good condition.

The theft was considered one of the most infamous heists to rock the art world in recent times. The thieves entered the Van Gogh museum from the roof of the building, which allowed them to get past security and cameras undetected, even though their entry did trigger alarms. They had used a ladder to climb up to a window and then smashed through it using a cloth to protect their hands.

Two men, Octave Durham, an art thief who earned the nickname The Monkey for his ability to evade police, and his accomplice Henk Bieslijn, were eventually convicted of the theft in 2004 after police discovered their DNA at the scene of the crime. They were handed four year sentences, but authorities were never able to track down the stolen works.

The FBI considered the heist one of the “top 10” art crimes, according to its website. Italian investigative authorities told the Ansa news agency that the paintings were worth £77m.