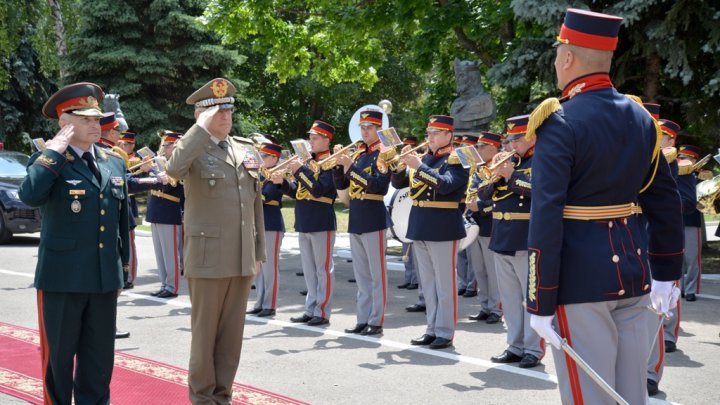 Defense Minister Eugen Sturza today met with Chief of General Staff of Defense in Italy, General Claudio Graziano. The military official visits the Republic of Moldova for the first time during 8-9 June at the invitation of the National Army Commander, Brigadier General Igor Cutie.

The parties reviewed the regional security situation and discussed Moldovan-Italian cooperation on the defense dimension.

Minister Eugen Sturza introduced to General Graziano the priorities of the institution and informed him the projects initiated under the comprehensive reform of the defense dimension, reforms aimed at modernizing the National Army.

Also, the Minister of Defense thanked the Italian Government for the military equipment and technique donated earlier this year and for the training of the military and civil servants of the National Army in the educational institutions in Italy.

At the same time, the Minister of Defense appreciated Italy's financial contribution to the NATO / PfP Project on the Destruction of Pesticides in the Republic of Moldova.

General Cutie informed the Chief of Staff of the Italian Defense Force about the objectives of the National Army, focusing on the development of military capabilities, the professionalization of the National Army, as well as participation in foreign operations. In this respect, General Cutie appreciated the support of the Italian army for the Moldovan soldiers, stationed in Kosovo's KFOR mission.

In turn, General Graziano mentioned that the Moldovan peacekeepers demonstrated good training during the mandate, their courtesy being appreciated by Italian generals who served as commanders of the KFOR operation.

Finally, the two officials reiterated their mutual interest in expanding and deepening the cooperation between army of the Republic of Moldova and Italy.