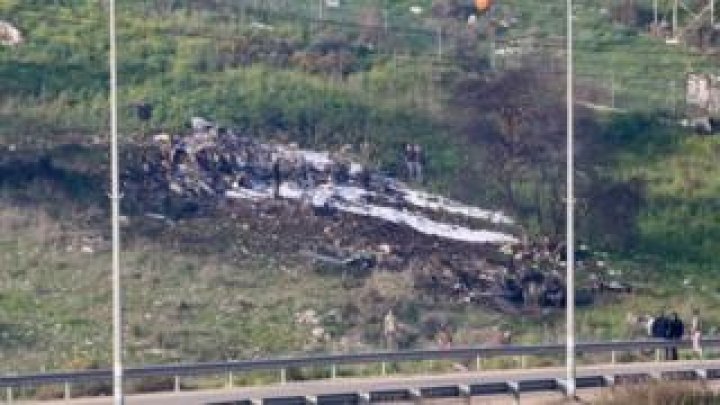 An Israeli F-16 fighter jet has crashed amid Syrian anti-aircraft fire after an offensive against Iranian targets in Syria, the Israeli military says.

The two pilots parachuted to safety before the crash in northern Israel. It is believed to be the first time Israel has lost a jet in the Syrian conflict.

Israel was carrying out strikes after the launch of an Iranian drone into Israel. The drone was intercepted.

Israeli strikes in Syria are not unusual, the BBC's Middle East correspondent Tom Bateman says, but the loss of an Israeli fighter jet marks a serious escalation.

In other developments in the Syrian conflict on Saturday:

In a statement, the Israeli military said "a combat helicopter successfully intercepted an Iranian UAV [unmanned aerial vehicle] that was launched from Syria and infiltrated Israel".

It said the drone was identified quickly and was "under surveillance until the interception".

The drone went down on Israeli territory and was "in our possession", IDF spokesperson Brig Gen Ronen Manelis said.

The military said that in response the IDF "targeted Iranian targets in Syria". It said the mission deep inside Syrian territory was successfully completed.

After coming under Syrian anti-aircraft fire, the F-16's two crew ejected and were later taken to hospital. One of them was "severely injured as a result of an emergency evacuation", the IDF said.

It was not clear whether the F-16 jet was hit by anti-aircraft fire or went down near Harduf for other reasons.

It is the first time Israel has lost an aircraft in combat since 2006 when an Israeli helicopter was shot down over Lebanon by a Hezbollah rocket, the Jerusalem Post reports.

All five crew on board - including a female flight mechanic - were killed in that incident.

Syrian state media quoted a military source as saying that the country's air defences opened fire in response to an Israeli act of "aggression" against a military base on Saturday, hitting "more than one plane".