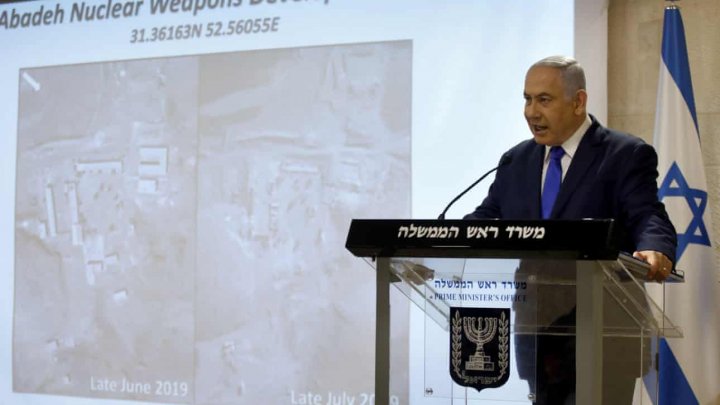 Benjamin Netanyahu has unveiled what he claims was a previously undisclosed Iranian nuclear weapons facility and accused Tehran of destroying the site to hide the evidence.

Without providing details, he accused Iran of using the facility near the city of Abadeh to “conductexperiments to develop nuclear weapons”.

The Israeli prime minister was immediately accused of using sensitive intelligence to appear statesmanlike, just a week ahead of next Tuesday’s election, writes The Guardian.

Fighting a fierce reelection battle, Netanyahu has repeatedly promoted himself as the only leader capable of dealing with global security threats. His hastily-gathered press conference, televised during primetime evening slot, showed satellite photos from June of the site near the central Iranian city.

He said the facility was destroyed in July, after the Iranians realised they had been discovered, but it was not clear why he waited until now to disclose the details.

“Netanyahu’s use of sensitive security information for propaganda proves that his judgment is flawed,” said Benny Gantz, the head of the main opposition party, Blue and White. “Even in his last days as prime minister, Netanyahu worries only about Netanyahu.”

Iran’s foreign minister, Mohammad Javad Zarif, responded to Netanyahu on Twitter, referring to him as “the possessor of real nukes” who “cries wolf – on an alleged ‘demolished’ site in Iran”.

Zarif did not address Netanyahu’s claims about Abadeh but accused the Israeli prime minister of wanting another war.

In April 2018, Netanyahu made a similar announcement, claiming that Israel had discovered tens of thousands of documents from what he called Iran’s “Atomic Archives”, which he presented as new evidence. However, key documents had been made public years earlier in 2011 by the UN nuclear watchdog, the International Atomic Energy Agency (IAEA).