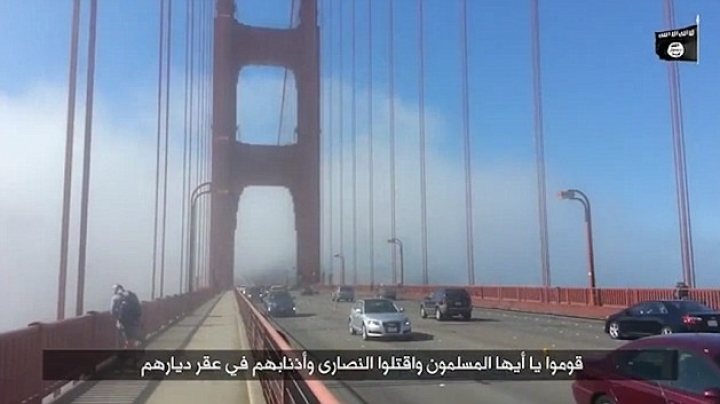 A chilling new video has been released by terror group ISIS where it threatens both San Francisco and Las Vegas, reports Daily Mail.

The footage shows shaky clips of both the Golden Gate Bridge and the Las Vegas Strip while jihadis praise Omar Mateen, who killed 49 people at an Orlando nightclub earlier this month.

It is believed the video was released after being made by militants in Mosul, Iraq, while some of the footage was actually filmed on the streets of the west coast cities.

In one clip believed to have been shot from a cycle path, the Golden Gate Bridge can be seen with the camera panning up and down the crossing.

The terror group then features a shot of the busy Las Vegas strip, which is believed to have been filmed from the pedestrian bridge next to the Caesar's Palace hotel.

The video then cuts back to San Francisco, showing a clip of Pine Street heading towards the Financial District, and finally Powell Street heading north on a cable car.

He too was an ISIS militant and after the murders posted a video on Facebook Live warning of a terror attack at the Euro 2016 football tournament in France.

Meanwhile, also included in the nine minute video is footage of US President Barack Obama making a statement in the White House, with blood superimposed on the screen behind.

Another image also shows Obama alongside French president Francois Hollande, with flames rising up around the pair.

However several threats have been made against both San Francisco and the Golden Gate Bridge since the September 11, 2001 terrorist attacks.