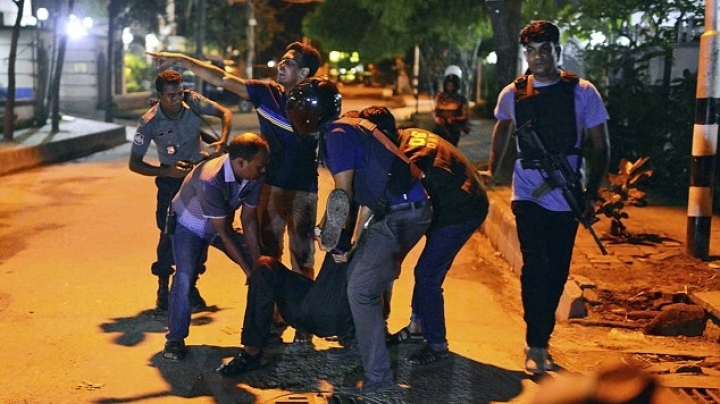 ISIS has hacked to death 20 foreigners during a terrorist attack on a restaurant in the Bangladeshi capital Dhaka, reports Daily Mail.

A group of heavily-armed terrorists shouted 'Allahu Akbar' as they attacked the mainly foreign patrons inside the Holey Artisan Bakery in the city's diplomatic quarter.

Nine Italians, one American and an Indian are among the dead, it has been confirmed.

Survivors claimed the killers cut down those who were unable to recite passages from the Koran.

On Friday night, Hasnat Karim had brought his family to celebrate his daughter's birthday.

Hasnat was too traumatised to say more than a few words about his ordeal, saying only that the hostage-takers 'did not misbehave with us'.

But he detailed to his father Rezaul how the gunmen - who were armed with automatic weapons, bombs and makeshift machetes - had split the diners into two groups.

Rezaul said: '(The foreigners) were taken to the upper floor and the Bangladeshis were kept around a table.'

He said his son told him the terrorists 'did not hit people who could recite verses from the Koran. The others were tortured'.

He added: 'The gunmen asked everyone inside to recite from the Koran. Those who recited were spared. The gunmen even gave them meals last night.'

Elite Bangladeshi commandos stormed the building after siege of more than 12 hours, freeing some 13 hostages.

Six of the terrorists were shot dead and one was arrested at the scene.

Armed terrorists raided the building in Dhaka's upmarket Gulshan quarter taking at least 30 hostages, most of whom were foreigners.

The terrorists were surrounded by at least 100 elite commandos for some 12 hours before the security forces recaptured the building.

Bangladeshi officials confirmed 20 civilians were killed during the attack.

A further eight hostages managed to escape in the minutes after the attack began.

The gunmen were armed with high-powered automatic weapons, explosives and knives when they entered the Holey Artisan Bakery, which is in the capital's diplomatic zone.

The ISIS media wing has claimed responsibility for the attack which was launched on the final Friday of Ramadan, as millions of Muslims prepare to celebrate the Eid holiday.

The final ten days of Ramadan are the most solemn in the Islamic calendar.

However, Bangladeshi prime minister Sheikh Hasina condemned the terrorists, one of who has been arrested alive.

She declared two days' of national mourning following the atrocity.

She said: 'Anyone who believes in religion cannot do such act. They do not have any religion, their only religion is terrorism.'

Two police officers were killed, including a local police station chief, Mohammed Salahuddin, who was earlier injured in the shoot-out.

According to a local photojournalist, Mr Salahuddin was asked by his colleagues not to cross the cordon as he was not wearing a bullet-proof vest.

Just moments after he crossed the line, according to the Daily Star in Dhaka, he was shot.

Another 25 officers and one civilian are being treated for injuries from gunshots and shrapnel, with 10 people in a critical condition, according to hospital authorities.

ISIS has claimed responsibility for the attack, according to SITE Intelligence Group, which monitors jihadist activity.