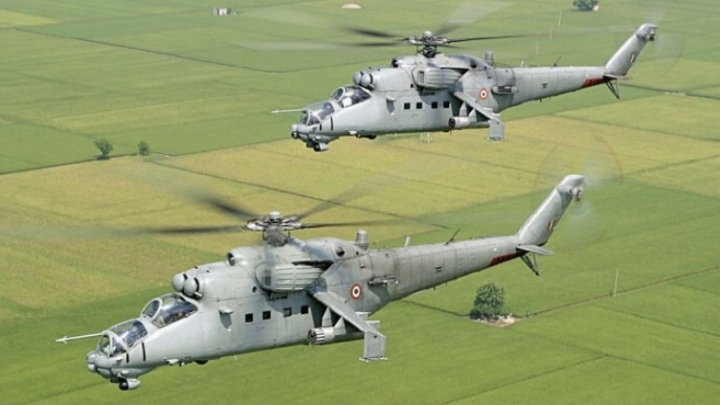 Isis fighters shot down a Russian helicopter above Syria, killing both pilots on board, reports Daily Mail.

The chopper was flying over the city of Palmyra and attacking advancing terrorists when it was brought down yesterday.

The Russian Ministry of Defense said the skillful crew initially drove the terrorists back but the helicopter was shot as it turned around to return to base.

Footage has emerged appearing to show the moment the helicopter was brought down.

It swirls in the air and narrowly misses colliding with another aircraft before plummeting to the ground below.

An official statement from the Ministry of Defense said: 'On July 8, Russian military pilot-instructors Evgeny Dolgin and Ryafagat Khabibulin, were conducting a calibration flight on a Syrian Mi-25 (export version of the Mi-24) helicopter loaded with ammunition in the province of Homs.'

'The crew received a request from the Syrian command group to help defeat the advancing terrorists and fire for effect. The captain of the aircraft, Ryafagat Khabibulin, made the decision to attack.'

'Having spent their ammunition, while turning back to the base, the helicopter was shot down by terrorists from the ground and crashed in an area controlled by the Syrian government. The crew did not survive.'

The Ministry added that both pilots will posthumously receive state awards for their actions.

A statement from ISIS, translated by the ISIS-affiliated Amaaq news agency, read: 'By Allah's grace alone, the soldiers of the Khilafah launched an attack with heavy weapons on Nusayri regime locations east of the silos in Tadmur city.

'The Mujahidin managed to take control over three checkpoints of the apostates, where afterwards, one of the knights of the shahada managed to advance with his boody-trapped BMP and blow it up amid a gathering of elements form the army and the Rafidi militia elements that support them, killing and injuring dozens.

'In the meantime, the soldiers of the Khilafah shot down a Russian helicopter as it attempted to raid their locations, which led to destroying it and killing those on board and all praise is due to Allah.'