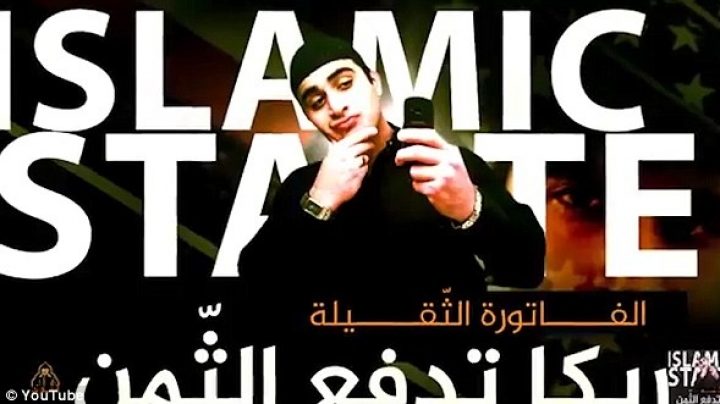 A propaganda video made for ISIS has been released which uses footage from the Orlando atrocity to promote further bloodshed, reports Daily Mail.

The more than five minute film shows police and ambulance crews outside the gay nightclub Pulse where 49 innocent people were murdered.

In the midst of the worst mass shooting in U.S. history terrorist Omar Mateen called 911 and pledged allegiance to ISIS.

Now a video which refers to ISIS, but has not yet been verified as authentic by the extremist group, which claims to follow Islam, has been published on YouTube.

It begins by showing a selfie of body builder Mateen pouting at the camera in front of the words 'Islamic State'.

Footage of British extremist Jihadi John follows with audio in English about American warplanes which have helped Coalition forces on the ground to force ISIS into retreat in Iraq and Syria.

The video warns Barack Obama about 'bloodshed on your people' if US forces, along with its allies, continue to engage with ISIS extremists.

Father-of-one, Mateen, 29, who worked as a security guard, was a regular at Pulse for years where clubbers said he danced with other men and drank alcohol.

He was said to be leading a double life and could have traveled to the club - a two hour drive from his home in Fort Pierce - to escape the attention of family and friends.

The 49 people who died were mostly men in their 20s and 30s. The youngest was just 18 - Akyra Monet Murray, a talented female basketball player. The oldest was 50-year-old Franky Jimmy Dejesus Velazquez, a professional dancer.

Thousands of mourners, including gay, Muslim and Latino community leaders, came together in Orlando yesterday to share their grief.

Speakers from the local Muslim community took to the stage to denounce the actions of the shooter, who was a radical Islamist.

Rasha Mubarak from the Council on American-Islamic Relations of Florida, said: 'It was just yesterday [Sunday] when Orlando, the beautiful city, was dismantled - but this, right here, is a unity message. It is a powerful message that we will not let fear and hate divide us.'

Communities in towns and cities across the U.S. and the world united yesterday against the barbaric homophobic killings.