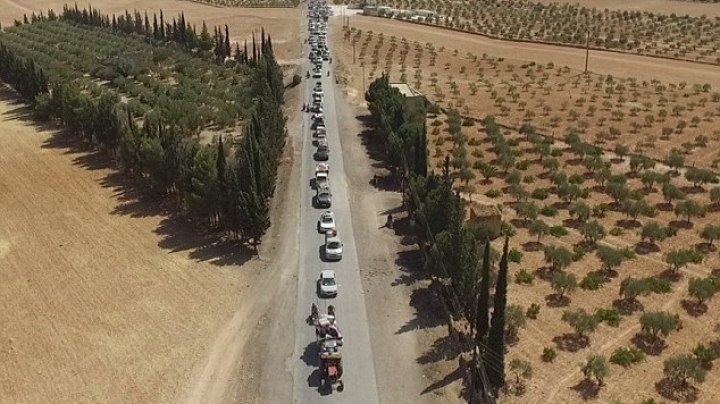 The Syrian Democratic Forces said the pictures, showing a convoy of hundreds of vehicles, were taken on Friday.

The US-backed alliance of Kurdish and Arab fighters did not attack as there were civilians in each of the vehicles and it wanted to avoid casualties.

The militants were thought to have gone north, towards the Turkish border.

As it became apparent that the town would fall, some 100 to 200 IS militants gathered members of their families, supporters and civilian hostages, Baghdad-based US-led coalition spokesman Col Chris Garver told reporters on Tuesday.

The civilians were then placed with the militants in every vehicle in the convoy that headed north, tracked by SDF fighters and the coalition, he said.

"We had to treat them all as non-combatants. We didn't shoot. We kept watching."

Hundreds of the civilians were released on Saturday, while others escaped.

During the offensive, the SDF had offered the militants a safe route out of Manbij to avoid civilian casualties, but they refused.

Col Garver said the jihadists kept "throwing civilians... into the line of fire, trying to get them shot to use that potentially as propaganda".

IS militants attempted to flee the Iraqi city of Falluja in a large convoy in June, but were bombed by Iraqi and coalition warplanes. About 175 vehicles were destroyed.