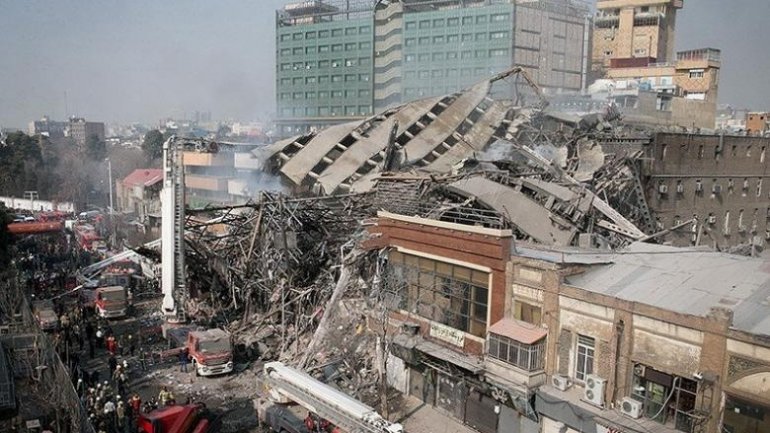 Iranian rescuers have removed three bodies from the rubble of a high-rise building in Tehran that collapsed after a fire, a fire department spokesman said on Saturday, as hopes of finding survivors trapped beneath the shopping mall were fading.

"Rescuers are tunneling under the rubble to try to reach the cellar of the Plasco building, but we have not succeeded yet," Tehran fire department Jalal Maleki told state television.

The television quoted Maleki as saying equipment used to locate survivors had not given any indications on the third day of rescue efforts, and that "the probability of rescuing anyone alive from under the ruble is very low".

"The total number of those under the rubble, including the firemen, is a maximum of 25," Maleki said. "So far, three bodies have been brought out."

Officials had said on Friday that 25 people were still unaccounted for after the collapse of the 17-storey building on Thursday, in addition to 20 firefighters who were feared dead in the blaze, informs Reuters.

At least two of the recovered bodies belonged to firemen and a third injured fireman had died in hospital, state TV reported.

"This is a lesson and a warning for all officials over the security of the lives of citizens, which is a civil right," President Hassan Rouhani told state TV during a visit to the site of the building on Saturday, declared a day of national mourning.

Authorities have estimated the damage at about $500 million, and said that most of the shops and businesses were not insured because safety standards had not been met.