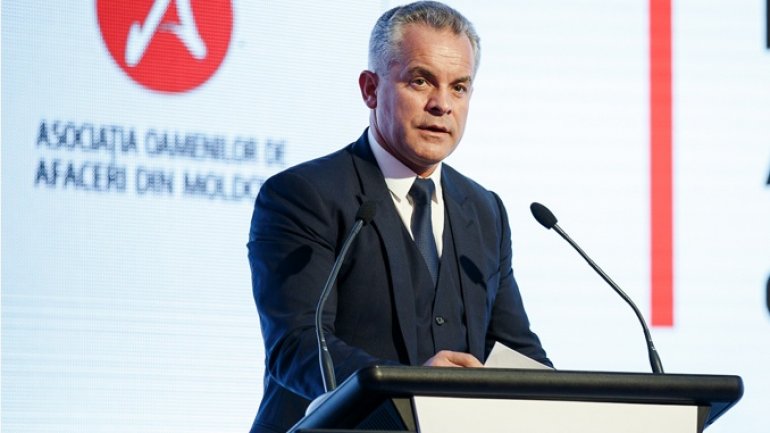 Interview with Vlad Plahotniuc about the election campaign: which are the real chances of the candidates, for whom he will vote in the IInd round of the elections, how the parliamentary majority will govern if the president is elected from the opposition

The election campaign is fully underway and spectacular changes have emerged. Sometime you have been skeptical about the single candidate.

-- And I was right as I said that they would not make that decision until beginning of the campaign, as it would have been normal, they waited for all kinds of polls that could be made before the campaign as well. In fact, there was no desire, and then I pointed out the frivolity of those negotiations. And they would have not made that decision if they had not panicked when they saw Marian Lupu going so quickly past them.

How does the DPM strategy affect the designation of the single candidate?

-- There are no spectacular changes as the withdrawal of Nastase was predictable and logical. He simply gave up when he saw that no longer has a chance. Remember that I have recently predicted that such a kind of candidates have no chance to win. They are persons who promote only their obsessions and have an aggressive behavior; they do not come up with concrete solutions and projects for the country. I have also said it was an expectable event, and that is because there was a reason for his withdrawal: his masters had seen that Marian Lupu takes a serious advance and they had scared, so they had decided to limit the damages and to obtain throughout this adventure, on which they had spent millions of Euros, an eventual leniency from the foreign partners. I think they will not get it as well, they will remain without the DA Platform, but they have done a well thing when they withdrawn Nastase, let him cry on against me and the DPM, but at least not to intoxicate the election race where there are candidates who have projects worth of being debated. His withdrawal has de-polluted the election race.

Does the single candidate become a danger to Marian Lupu?

-- The candidate of the right - in fact one of them, as there are others on the right – is not a danger. I have not seen her making statements that she wants to cancel the EU Association Agreement, to federate the country and other nonsense. Maia Sandu says simple and campaign things that are harmless to the country. The problem is Dodon, as he is a dangerous guy because he is extremely ambitious and insists on his ideas, which in this case are totally misplaced ideas as they certainly do not match the national interest. Just look how many people he managed to deceive throughout these years making them believe in an illusory version that Moldova should develop in the Customs Union, all these due to his long time and obsessed lies. And the right parties have made the mistake of not taking him seriously and not stopping him in time, they did not speak with people more clearly, did not tell them that Dodon lies to, and manipulates, them. This is how he managed to grow up, and now the effort to stop him is much stronger.

Who is your protégé, Igor Dodon or Maia Sandu, because there are speculations in both directions?

-- Both of them have grew up somewhat under my name, talking about Plahotniuc, but now it is time to fend for themselves as neither my name, nor myths help them anymore. This is time for each of them to prove their abilities. Dodon was more persistent and has a higher rating, Maia Sandu started to attack me after the LDPM had not designated her minister, when she had made a party, and has a lower rating. That for amusing ourselves of how political projects and heroes of our politics appear and disappear. I think both of them should get rid of dependence on myths and images of false saviors of the nation, they should show people what they are able to make for them, rather than their beautiful postings on Facebook or strong words.

Do Dodon and Sandu have one point in common besides opposing you and the DPM: they both opposed the Agreement with the IMF?

-- Yes, that is strange. I do not imagine one of them becoming president to block the Agreement with the IMF; I think that their earlier statements were just politicking. I would say here that the Agreement with the IMF and the presidential elections are political events of the autumn. One will be the time at which we can say that Moldova regains its credibility before the crisis, in 2014, and the other would be the time of strengthening stability and following the European vector. After the Government assumed responsibility in September, we reached the final phase of the negotiations over the Agreement with the Fund and there are great chances to sign it in the coming weeks. Maybe even between the 1st and the 2nd round. It would be very good, and if we take into account the economic growth of above 2%, which also has great chances to be achieved, we can say that 2016 is a positive year for Moldova despite the hardships with which it began.

Whom the DPM will support in the IInd round if Marian Lupu loses the elections, Igor Dodon or Maia Sandu?

-- You anticipate, but we still have a long period ahead, the trend of our candidate shows a consistent increase, I am confident that he will reach the second round. Otherwise the party will analyze the situation and we will made decisions. But this is not up to one person or another, so I do not want to anticipate.

Anyway Maia Sandu or Igor Dodon? Tell me as an ordinary citizen, if you cannot answer as a politician.

-- Between Maia Sandu and Igor Dodon I chose Marian Lupu, of course. But if we compare these two candidates, Dodon is a real threat to the Republic Moldova and a person who insists with his wrong and harmful ambitions. He is not dangerous for me or for the DPM, we have coped without him with no problems so far (see also the censure motion that failed 3 weeks), but he has an extraordinary ability to manipulate and becoming president he could put the country on an extremely dangerous path. I think that Maia Sandu has a right direction; she speaks her mind, even if she screws up often and is deceived by tricksters, is used in their wars, at least she seems sincere and I did not see her promoting ideas harmful to the national interest. Perhaps she would not be a good president, but I do not think she would attempt to destroy the country. Whatever the case is, I stick to the idea that the Republic of Moldova should be run by a pro-European president.

But how the Government and the Parliament will collaborate with Maia Sandu, if she wins?

-- They will have to cooperate institutionally as it is in normal in a state. There can be different opinions, they will be solved through dialogue, but citizens expect the persons they send to work in high positions to co-work, rather than to quarrel. The Republic of Moldova is not the only country where the president and the government come from totally different political areas. Differences in the views of the presidential institution and the government may produce good effects provided the approach is constructive.

After these statements, Igor Dodon will accuse you again of supporting Maia Sandu. Have you really discussed this issue with US officials?

-- As for support, I support Marian Lupu. I have answered your hypothetical question. Of course I have talked with US officials about the election campaign, in both the working visit to the US and other subsequent talks. But that does not mean we have agreed on one candidate or another. The foreign partners do not interfere in our domestic politics. May be Dodon speaks of his other personal experiences. He should think very well about the consequences of his ideas, because if unfortunately he becomes president and gives up the European course, he knows what I am capable to do, he will see real protests. If he comes to make me hero of the pro-European revolution, you will see how my rating will become opposite in just one day. And I do not think he want that.

We end jokingly, it's good that there is no bitterness in this campaign and that you can joke.

-- I see no reason not even joking; emotions should be under control as they produced too many damages for our policy.

Thank you. I wish you a successful campaign!

I thank you as well.