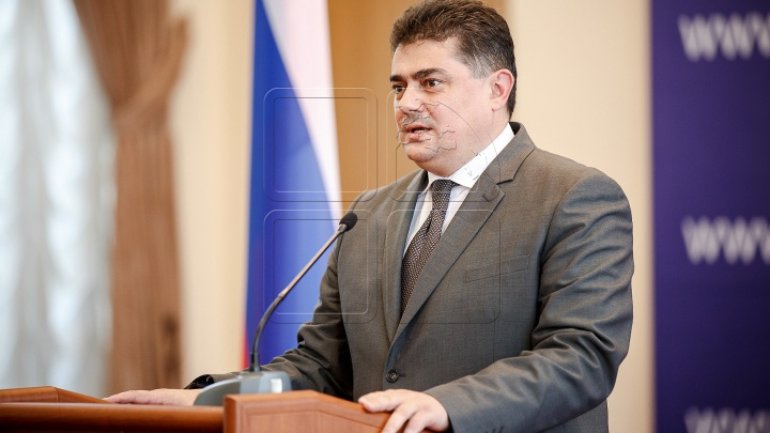 The Government believes that Moldova's economy has all the chances to grow in 2018. A boost will come from the massive investments that are foreseen in the road infrastructure development and energy. Octavian Calmîc will answer our questions whether or not this economical growth will allow the creation of new work places.

-In 2017, your Ministry has initiated multiple reforms, meant to reduce the pressure upon business environment, as well as to improve it. How were the reforms accepted on the market and what actions you plan to take?

"Truly, 2017 was an extension of 2016 from the point of view of reforms, in the favor of business, therefore, we continued to reconstruct all control institutions, to bring this reform to an end. We are actually on the final stage, as 2018 will begin with a new working structure or with renewed interaction between private enterprises and state institutions. We managed to decrease 70% of the control bodies, to 13. Therefore, those 13 will interact with companies on the principle of transparency, by notifying the enterprises of planned inspections and the taken decision. Another effect of this reform is reducing the number of documents required for permits. We managed to reduce the required documents by 60%, or, if to be more exact, by 64%, so that people will have space to breath among all this bureaucracy which previously existed. Around 80 documents required for permits in various areas, such as constructions, transport, things necessary for the regulation of those fields and we wished to have as little effect upon businesses as possible, to allow them continue developing, to avoid those useless talks with the private sector and, actually, in all institutions we chose with the installation of a single window. When an economic agents comes to submit all documents they must present, usually they wait for a week, or two and then return to the same window to find out what decision was taken. We have actually tried to easy and optimize the expenses someone has to make to launch a business, or to continue their activity. Here, we must underline a distinctive element of this reform - Agency for Public Services, which comes in to solve multiple problems simple people have, citizens of Republic of Moldova, when they need any documents. They register any idea, any business, any change in the status or extension to other areas, but in the end, it will irradiate all businesses which close in Republic of Moldova. It will be a contact point and will work as a consultant for the life of a company" Minister of Economy and Infrastructure, Octavian Calmîc said.

-In the past few year, we saw the development of some fields with big potential, such as the car industry. What other sector could pose an interest for foreign investors?

"The car industry has yet to reach the size we wish for, as it still has place to grow, even if, in the past few years, this sector was tested within Republic of Moldova and we speak of investors from Europe, who came two, three years ago to Republic of Moldova. Because it went so well, we have overcame any barriers and inconveniences they faced. All those companies decided to expand, to open new factories during this year and, using this experience, we managed to bring new companies not only from European Union, but also from other countries, such as Japan, to our country, allowing us to provide much perspectives in the car industry, as it is an intermediary, we offer more services in those terms, solve problems faster of social, economic and infrastructure character. Therefore, we have more perspective in the development of this sector, as it attracts employees, respectively, we create new jobs for our citizens, better paid then in other fields. We offer them a perspective to shift from one area to another, in case other investors come into picture. If we speak of other sectors, taking into consideration our responsibilities, we try to develop IT parks as well, as last year, we have adopted a new legislation regarding IT parks in Republic of Moldova. We are confident that It parks in Moldova have space for growth. The contribution of the economic growth, as well as the GDP of Republic of Moldova has to grow even more. At the moment, more subject upon this topic can be found in a grey zone, while we try, through those fiscal facilities, to bring them to light, both the employees and the employer together. So that they can work openly, to interact with foreign investors. We create multiple platforms, one of them being Tekwill, which was created with the support of Ministry of Economy and Infrastructure and operates, along with Technical University of Moldova.

We try to multiply this network so we have a geographical representation on the territory of the country. We are talking about the expansion of these networks in Balti, Cahul and later one in Comrat. But we also talk about extending this approach to the sectoral dimension as well. We want to make these incubators of ideas in the area of IT and ASEM, and at the State University, where there is more a sectoral approach - at USM more with scientific, research and innovation approach and ASEM with economic inclination, so that we can develop different platforms, applications, why not, in the Republic of Moldova, to be used not only by our companies, but also by foreign ones. We see these two new areas as priority so as to give us much greater economic growth at the moment.

Undoubtedly, we need to continue with the classic, textile, machine-building or construction materials industries, but also the agrarian area must be supported by the state because it is based on certain basic elements of food safety. But these sectors, as a rule, require investment. They do not generate income, mostly it generates stability in society. So we have to compensate, we have different sectors, so only in a joint effort we can develop or change our economic growth paradigm, "Minister of Economy and Infrastructure, Ocravian Calmic said.

- Are there any official notices of potential investors who are interested in our market?

"We are talking with two packages of investors. The first package - those already in the Republic of Moldova, we are trying to encourage them to diversify their factories and plants in other regions.

In fact, all those who opened factories two or three years ago in Moldova are considering expanding production in other districts of the country. And I will just give some examples: the Balti companies are expanding their production and will launch a new factory in one of the sub-areas of Balti. The Austrian company also has made a new factory. Summitomo, which recently opened in Orhei, being in a free economic zone of Balti.

Also, the leadership that was recently in the Republic of Moldova examines the possibility of expanding and creating a new industrial platform. Fujikura in Chisinau already has a partnership with Comrat, including an advanced discussion with the Comrat authorities, so that in the half of next year to launch a new production, around 2000 new jobs in the newly created area by the Parliament and backed by our ministry.

We are also talking about capitalizing on the potential in Cahul, where one of these companies is oriented to develop but, at the same time, we are talking about capitalizing on the potential offered by the entire territory of the Republic of Moldova, we do not refer only to the Free Economic Zones. And here we have some investment projects. The first is related to Industrial Parks. We have two model industrial parks, which we use and try to multiply as an experience. We are talking about the industrial park "Tracom", the former tractor plant and that from Raut, from Balti, where a new platform with a representation of several districts around Balti is opening in the field of textiles. So it is a new approach when creating regional hubs and we are trying to develop, relying on those existing industrial centers, to try to develop other smaller productions or related products in the district centers around these regional centers. And, in fact, this is the goal and we will succeed, "said Minister of Economy and Infrastructure, Octavian Calmic.