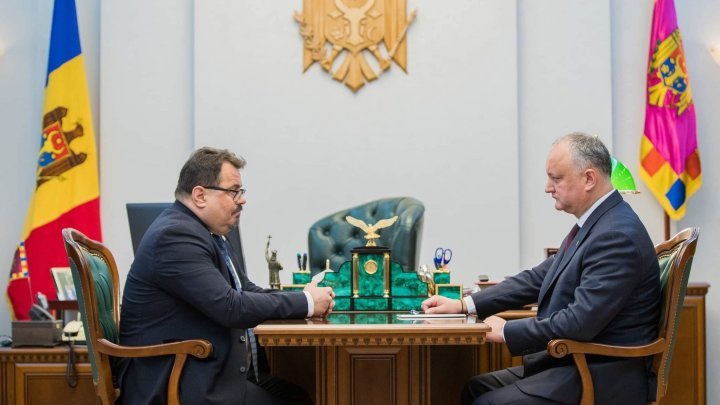 After discussing with the US Ambassador to Moldova Dereck J. Hogan, Moldova's President Igor Dodon met with the Head of European Union Delegation to Moldova Peter Michalko.

"We discussed many topics related with the strategic partnership between our country and EU. I reaffirmed the commitments to lead the Republic of Moldova in implementing the agreements signed with EU and deepening the commercial-economic relations with EU states.

I also informed Mr Michalko the internal political situations in Moldova. In this context, we made an exchange of opinions on the need to maintain the political processes in accordance with the law, the European principles of the state of law", quoted the message of president.

The head of state Igor Dodon also had a meeting today with the US Ambassador to Moldova Dereck J. Hogan.

"We discussed the actual subjects regarding the internal affairs of Moldova. In the context, I informed the Ambassador of the risk that the Government might fall", Igor Dodon wrote on his Facebook.

"I highlighted the fact that the Presidential Administration opts for the political-social stability but I consider all the political forces need to respect the constitutional framework without violating the principles of the state of law", quoted the message of president.